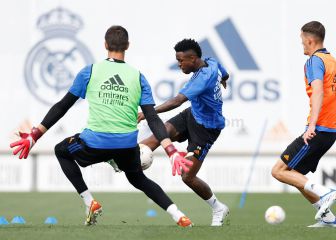 He will deny it to the limits of arithmetic, but Madrid takes this League for granted after its umpteenth miracle comeback in Seville and the umpteenth bump of Barça. Not even Laporta’s populist optimism remains from the straw. So Ancelotti saves Modric the trip to Pamplona and takes care of Casemirowith a slight muscle injury. With the work done and the City at the gates, it’s time to rotate, with the character’s own moderation and with the limitations of casualties that They have forced him to summon two players from the subsidiary: Rafa Marín and Latasa, emergency center forward due to the redundant casualties of the non-existent Jovic and Mariano (Follow today’s game live on As.com).

It has also done its job Osasuna. Saved amply, he still has a small hope of reaching Europe and the illusion of beating Madrid, something that has been denied him for eleven years. The last time he did it, Camacho sat on his bench and Mourinho on the Whites’ bench. Since then, fifteen games, with eleven white victories and four draws, the last in the first leg at the Bernabéu. A notice to the leader.

The last thing that is known about the Navarrese is that they have won three of their last four games and that Chimy Ávila and Budimir have scored seven of their last eight goals. A curious couple, late explosion. For Ávila, raised in Empalme Graneros, a suburb of Rosario, football was a lifeline: “You could only choose between crime and drugs or work to be what I am. Many players stay on the road to poverty” . It was not his case. He started in Tiro Federal, made the jump to San Lorenzo and even tried out in the MLS. He was losing prominence in the Cyclone and Leo Franco, who had been his teammate, brought him to Huesca. Two good years, a signing for Osasuna… and two consecutive broken crusaders, one in each leg after scoring eleven goals in his first year. This season he has seven and is the biggest idol in El Sadar.

Ante Budimirwho has scored four games in a row, is 30 years old and has already played in five leagues and nine different teams, but nowhere else has he scored as many goals as in Pamplona. Today, he and Chimy (it was spicy like chimichurrii and that’s where the nickname comes from) will take aim at a clean-shaven Madrid.

They are the tip of an iceberg, but the livelihood of the team is at the base: Sergio Herrera, one of the goalkeepers of the League; Moncayola, the team’s flag, and David García, a central defender on many agendas. He is the player who recovers the most balls in the championship and the second who wins the most defensive disputes. That, in his area. In the outside he adds four headed goals. Only Luuk de Jong, Barça’s emergency exit, has scored more. And in the center of everything, Jagoba Arrasate, who has improved his winning percentage in Osasuna in Real Sociedad or Numancia. He has given stability to the project. He took Osasuna out of Second in his first season and has kept it with some comfort in the next three. The club also helped him last year by not losing patience when the team found themselves at the bottom in the first round.

arrasate will have to repair the loss of Lucas Torró, a former Madrid youth player who is facing the season of his life. He is serving a sanction and everything indicates that Moncayola will play his role alongside Javi Martínez. The coach also warned yesterday that he will not change the automatisms of the game due to the arrival of Madrid, who already knows what awaits him: a high and brave pressure that makes Osasuna the second team that steals the most balls in the League and the one that loses the most.

on the other shore, Madrid does the math and looks at Manchester. And probably not in that order. He needs seven points in six rounds to be champion and there are no predators left in sight. So Ancelotti, now yes, distributes efforts. Nacho points to left back and Camavinga and Valverde, with some option for Dani Ceballos, for whom Ancelotti has had better words than opportunities, will accompany Kroos. A change of fiber for science. At this point it is worth pointing out a surprising fact. In one of Modric’s best seasons, Madrid did not lose any of the nine games he missed (six wins and three draws). And up, Rodrygo earned another opportunity in Seville to play as a starter. He has scored few goals, four, but he has chosen them well. He did the one that knocked down Inter in Milan and the ones that started the resurrections against Chelsea and Sevilla. The pending subject of him, daring, began to appear strongly in Pizjuán.

To whom not for Ancelotti is to Benzema, with that crazy rhythm of one goal per game. The great change in his football is that he is also capable of solving his bad days, that virtue that Cristiano Ronaldo was seen so many times. “He doesn’t need rest”, Ancelotti said yesterday. There is also no one who can give it to him, is what he prudently kept silent. In any case he is not expected throughout the match. His next assignment is in Manchester.