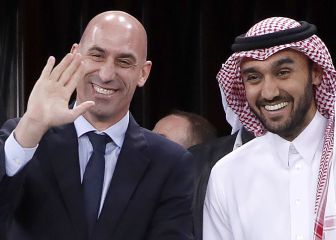 The week starts with all eyes on the Federation with the audios of Rubiales and Piqué that he has revealed The confidential. They break down how it was carried out so that the Spanish Super Cup was held in Saudi Arabia with the intermediation of Kosmos, the company of the current Barcelona captain. sources ofand the RFEF show calm and point out that it is a campaign of harassment and discredit. In addition, from the City of Soccer It was reported last Thursday that they had been hacked and information and private conversations had been stolen.

El Confidencial today reveals the content of various messages between Piqué, a Barcelona player and owner of the Kosmos company, and Luis Rubiales, president of the RFEF. In these conversations the departure of the Super Cup to Arabia is gestated. “Let’s see, Rubi, if it’s a matter of money, if they would go for 8, hell, man, you pay eight to Madrid and eight to Barça… the others are paid 2 and 1… they are 19, and you You keep the Federation six kilos, man. Before you keep nothing, you keep six kilos. And we put pressure on Saudi Arabia and maybe we’ll get him out… we tell him that, if not, Madrid won’t go… and we’ll get one more stick or two more sticks…”, says Piqué in one of the conversations.

In Las Rozas they point out that there is tranquility since the entire operation was presented, explained and supported by the Assembly of Spanish football. The agreement was approved and extended by the Federation’s highest body. And sources consulted by this newspaper defend the agreement: “It is an operation of 240 million for Spanish football with a 10% commission for the agency that proposes the business and that Arabia also pays.” And they add: “The information does not add anything new to what was published in 2019.”

In addition, they point out that the leaking of these messages is due to a campaign to attack the current board: “It is part of the campaign of harassment and smear that we are already used to.”

Tebas’s reaction: “It’s strong, I prefer that they explain themselves”

Javier Tebas has already commented on the information published by El Confidencial. In this case, the president of LaLiga has been cautious: “I haven’t heard the audio yet. It is an issue on which until those involved give their opinion, I am not going to say anything. The Super Cup is a tournament organized by the Federation. I don’t know if the agreements being talked about there are true, if it’s true, as I’ve seen in a headline, that most of it was shared between FC Barcelona and Real Madrid and the others gave them crumbs… They will be the ones who should tell if it is true or not. The veracity of the audios must be determined by them.

However, LaLiga also maintains commercial relations with Kosmos: “He has participated in the agreement we have with the fund that manages Port Aventura. It is an agreement at the commercial level. There is a sports café bar, it is a technological application path and a LaLiga amusement park path there. It is not a issue of organization of tournaments or anything. The link between LaLiga and Kosmos is business but you can not play League or Cup games there “.

Tebas, who encouraged LaLiga to play an annual match in Miami, does not reject the Super Cup being played in Saudi Arabia: “That the Super Cup went to Arabia, I said that seems correct to me. We wanted to take a League match to the United States and they did not let us. Perhaps the ideal thing was another country. I do not have my opposition to take the tournament out of Spain. Rather I am okay”.

See also  Beckham's son does not believe it: "This guy is a joke"