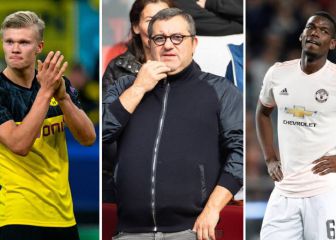 In July 2023, the ultra commissions charged by super agents for signings such as Haaland or Mbappé will end. The relatives of the players, powerful brokers of the 21st century, will also not have the right to earn money on a transfer if they do not have a license. On that date, FIFA will apply the new agent regulations that will be approved between June and September 2022. Then, the world of transfers will take a long-awaited turn for the clubs.

Until now, and especially in recent years, clubs found themselves with a row of commission agents who increased the cost of transfers. To sign a player or to sell him, they had to deal with an agent eager to make as much money as possible. But also with a father, a mother or a cousin who, without an official license, also negotiated their part. It was always legal, but in a little over a year, the rules will change.

Sources familiar with what will be the new regulation that will be approved by the FIFA Council between June and September 2022, informed EFE about the changes. As of July 2023, agents will still earn money, but not as much.

The rules will require charging up to a maximum ten percent of the value of the transfer if the agent represents the selling club; up to three if he works for the player or for the buying club; and up to a six if you work for both at the same time.

It will be prohibited to represent the three parties to avoid a “clear conflict of interest” because there have been cases of agents representing the selling club, the buyer and the player at the same time. FIFA will put an end to that. At most, one agent may represent both the player and the purchasing entity.

End of commissions to relatives

But the body chaired by Gianni Infantino will also lay hands on the third part of the leg that in recent years has been growing non-stop to the point of generating serious problems in many clubs. Many remember the Neymar case and his signing for Barcelona in which his father admitted receiving up to 40 million euros in commission from the Blaugrana club.

That, too, will end. Family members will only be able to access commissions if they are officially agents after obtaining their licenses. And, for this reason, perhaps, this summer will be the last in which parents like Mbappé’s have a lot of weight in the transfers of their children.

And, to close the circle, FIFA will follow the money trail. It will try to end payments in tax havens and will address the problem with a “payment cleanup project” in which fees go through one bank and in designated locations. In other words, if the agent is resident in Italy or Spain, it will be paid exclusively at the place of residence.

Will the superagent business end?

With these measures, FIFA does not intend to kill super agents like Jonathan Barnett or Mendes. They will simply earn less. The big business, that of the stratospheric figures for them, will end. They will go on to earn less money with the new maximum legal percentages.

“I don’t think it’s the end of the superagents, but they are going to earn less money. That’s where the problem is going to come from. The rules are going to generate a serious legal conflict. These agents are going to sue in all possible courts,” they explained to Efe the same sources.

Possibly, however, those demands will not go very far. There are reports from the European Parliament and the Council of Europe that applaud FIFA’s intentions. The Agents Regulation is going to be welcome and it seems that it is going to be here to stay.

take the money and run

Of course, between now and July 2023 a race begins to squeeze what will surely be the last year in which agents and relatives will be able to access commissions without regulatory control. This summer, and the next winter market, will be the last with absolute freedom of movement.

The final regulations to be approved by the FIFA Council have already been distributed to all interest groups: they are in the possession of clubs, leagues and players’ unions. They have received all the necessary information before their final approval.

With all the cards on the table, heAgents will scramble to complete their latest big deals. Haaland’s will not be the last. Mbappé’s is coming soon. And behind the French, some more will arrive. Throughout the summer, figures will dance that will receive agents and relatives. But, surely, it will be the last time that happens.

In FIFA they want to end a commission network that is capable of rewarding an agent who works for a year, like Haaland’s, with a figure close to 50 million euros. But, the clubs in which the player was trained (Bryne and Molde) during his youth, due to current FIFA regulations, will earn much less.

“While those who have invested years and years in helping the player to become a professional take five or ten million, those who help him in a transfer, in one year, take 50 million. It is nonsense. The norm, one of the things that it will guarantee, is that there is a fair distribution. And that the agents, who are very important within the system, charge rationally.”

The new regulation will guarantee rules and standards known to all. The signings like those of Haaland or Neymar, hampered by relatives or representatives, will have a limit. They will be cleaner, clearer. The clubs will breathe a sigh of relief and the agents will start a war whose end seems predictable: goodbye to the super commissions.