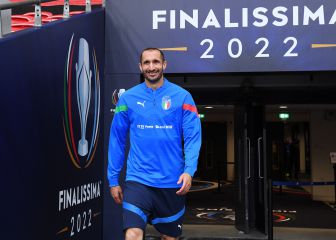 “Every Argentine wants to win in England,” the Argentine goalkeeper openly acknowledged, Emiliano Martinezat the press conference prior to the Finalissima. A tournament that has not been played since 1993 and facing tonight 20:45 (Spanish time) to Italy, the champion of the European Championship, and Argentina, that of the Copa America; two nations with a historical rivalry, but also share many ties. Therefore, tonight will serve as tribute to Diego Armando Maradona.

The legendary Argentine player, who died in 2020, will be remembered at Wembley together with Giorgio Chiellini, who will play his last match with the italian team. “A change of cycle”, as explained by the coach, Roberto Mancini, who after the Finalissima will undertake a renewal needed after staying outside of the World Cup in Qatar, and with the classification for the next European Championship still pending.

With more optimism the albiceleste faces the duel, which adds 31 consecutive games without knowing the defeat and that he has found in the ‘Scaloni cycle’ the stability he needed. The victory in the Copa América was only the first step, and the Finalissima It can be a good appetizer before the expected World Cup, but Scaloni is cautious.

“The most important thing is the objective that we have traced until November. That is the main objective beyond the title”, reasoned the Argentina coach, who It has two drops for tonight’s duel though did not want to reveal their names. Thus, Scaloni did not give clues about his eleven but he trusts that the albiceleste fans are the majority in the stands. More of 60,000 Argentines that will fill the streets of london to see a new Messi match at Wembley, where he lifted the Champions League in 2011.