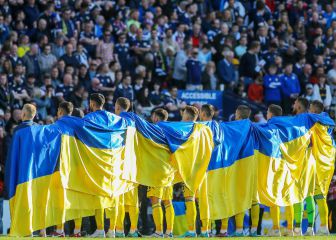 The greatest value that football can have is its impact on society. That Yarmolenko scores a goal more than two thousand kilometers from kyiv is not going to help stop the Russian invasion, but it does help, at least for two hours, a large part of the Ukrainians to be able to disconnect from the reality they are experiencing. The coach had an impact on this after beating Scotland. “This victory means a lot for our country. I believe that now, in our country, all the people, all the representatives of the Armed Forces who are in the trenches, barracks, hospitals and all our fans appreciate and applaud this game” says Alexander Petrakov. “We play for all the people who fight for the freedom of Ukraine. I told the boys before going out on the field that we play football for ordinary people, for our country, for the fans, for the victims. We took a small step towards the final. Today we made people happy. We are proud to be Ukrainians, to glorify our country in difficult times.”

Even Zelensky himself, president of Ukraine, wanted to give a message to the staff: “There are times when many words are not needed! Just pride! Just thanks guys! Two hours of happiness that we are not used to. They left. They fought. They persevered. They won. For the Ukrainians! It is a joy for our military, for our entire country. We are all fighting, each one in his front, for this. For our blue and yellow flag, for our shield in the heart, for a “Ukraine is not dead yet…” that cannot be silenced. We fight, we endure, we win. For the Ukrainians!”

See also  Blockchain Celo has been paralyzed for more than 15 hours, validators "work to restart the network" - DiarioBitcoin

Ruslan Malinovsky, Atalanta midfielder and one of the leaders of the Ukrainian game, also spoke along the same lines. “This victory is for all Ukrainians, for those who are now on the front lines.” Oleksandr Zinchenko, who was very emotional in the previous one, recalled that they still have one last battle left and that the heart will play a great role: “We all understand that the game against Wales is not about physicality or tactics, it is a game of survival. Everyone will fight until the end and give everything because we will play for our country”.