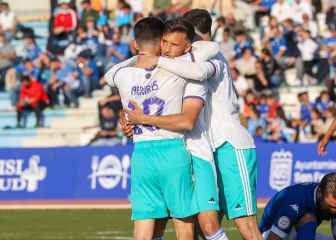 Don’t let the classification fool you, which places Castilla eighth and Alcoyano 13th. One point separates both and the equality between Raúl’s and Vicente Parras’s was already drawn in the tie of the first leg (1-1). He marked the one of almost always, You arrive, and the Magician will be, one more morning (12:00 RM TV), the key to the three points. A victory would allow the first white subsidiary to take the contenders for promotion (the playoff, to a victory). Common objective with those of Alcoy. Two teams and one destination: keep dreaming.

Besides, the 10 He has a double challenge, since he also fights to be the top scorer in the category even without being a striker. He has 13 goals and Quiles (Depor), leader, 14. Castilla is pure gunpowder (only Villarreal B started the day with more goals). Latasa is close to ten (9) and Peter and Aranda put decibels from the band, always looking to put it Rock And Roll to the matches.

Will Vinicius Tobias make his debut? That is the biggest unknown for a Raúl who will be able to line up his eleven fetish, except for the injured (long-term) Miguel Gutiérrez and a Rafa Marín who has been summoned by Ancelotti to go to Seville. Retu and Carrillo, favorites to take their places. Dotor, on the rise in recent days and confirming himself as a box-to-box from another category, and Antonio Blanco will be in charge of conducting the orchestra.

Parras knows what he will have in front of him, he is not confident, but he bets on presenting a battle: “We go to Madrid with the same confidence as always. Castilla is right now one of the best teams in the group. We have seven finals left, but we just have to focus on Sunday’s game.” Not so long ago, Alcoyano frustrated adult Madrid in the Cup, now they will seek to do the same with their puppies. One casualty, Carlos Blanco, scorer in the first leg. Defensive solidity, based on the security of the veteran José Juan under the sticks, and a lot of morale, the recipe for success.