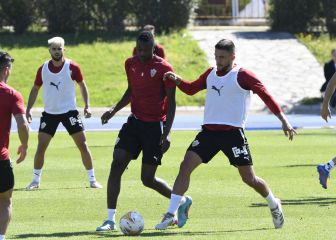 After Valladolid’s victory against Mirandés, Almería is obliged to win this game to end the day in direct promotion. It is not worth the draw against Sporting in a hurry, which maintains a seven-point distance with respect to the relegation border marked by Real Sociedad B and Amorebieta (follow the match live on As.com). Matchday 37 of the Second Division will close tonight at the Estadio de Juegos Mediterráneos with one of its great matches: an Almería thrown towards the promotion that he has in front of a Sporting that seeks to redeem itself from the puncture against Oviedo and sentence the permanence, especially after the defeat of Amorebieta last Saturday in San Sebastián. Martí, who will not be able to count on the sanctioned Christian Rivera and Berto, arrives questioned at the Mediterranean, the garden of Umar Sadiq. The Nigerian is on a roll in the Indalic fiefdom, where he has not yet lost this season (last year he barely did it twice) and where he has scored in the last six games he has played in front of his fans, materializing eight goals in that space of time.

That of the Nigerian is not the only weapon of an Almería that hit the table on the last day in Valladolid, tying in the final stretch despite the fact that Pacheta’s men were superior for a good part of the match. The team from Almeria has shown greater competitiveness and pressure management than in past seasons, seeking to gain a foothold in a direct promotion that they had not tried at this stage of the competition since 2007. With certain defensive mechanisms improved, the locals will also seek to show muscle in the second line of attack supplying a Sadiq whose mere presence is already a danger to rivals.

Rubi will give continuity to the eleven that tied at the José Zorrilla, although he is forced to move him as Eguaras has to complete the warning cycle. De la Hoz, surprisingly substitute in Valladolid, will thus return to a midfield, where there could be more changes, with the entry of Puigmal. The other proper name is Dyego Sousa. The Brazilian has received a medical discharge and returns to the squad after missing the last three days. In the shadow of Sadiq, he has been decisive in up to a dozen goals for the rojiblancos, with five goals and as many assists.

Sporting arrives in Almería in low hours again. The defeat against Oviedo has been a hard blow for the team from Gijón, which has had a tough week at the start, in the words of Martí himself. The Balearic coach has tried to raise the spirits and self-esteem of a squad that is very far from an objective that now is none other than to escape from the danger zone and close the permanence as soon as possible.

José Luis Martí has ​​the casualties of Christian Rivera and Berto González for this match, expelled for the incidents in the Asturian derby. The first affects the starting lineup because the midfielder from Gijón has always been a starter with the Mallorcan. Gragera has the opportunity to show the value he showed last season and at the beginning of this one. Not many more lineup changes are expected.

Almeria: Sadiq. All eyes are on him. Almería’s main argument, they are on a roll at the Estadio de los Juegos Mediterráneos.

Sporting. Fran Villalla. He returns to what was his home at a time in the game that is not up to the start of the season. More is expected from the Valencian.

Pressure. Rubi’s men are knowing how to manage the pressure perfectly, reacting more than positively in the most demanding moments, unlike in past seasons.

Doubts. The defeat in the derby has again caused mistrust in Martí’s team that needs to get away from the danger zone.

Dock. Rubi has won many matches thanks to his modifications made in the second part. On the bench he will have players who would be undisputed starters for other teams.

Return. Fran Villalba returns to what was his home at a time in the game that is not up to the start of the season. More is expected from the Valencian.

Almeria: Sousa returns after receiving a medical discharge. Eguaras is out due to suspension and Chumi, Martos and Nieto, due to injury.

Sporting. Rivera and Berto are sanctioned. Calavera, Jony and Guille Rosas continue to recover from their injuries.