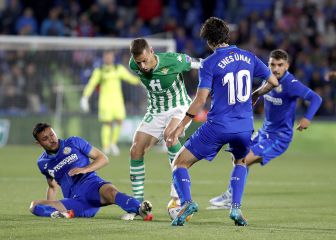 On Sunday, Getafe will have the first opportunity to certify their permanence at the Coliseum. He receives Rayo Vallecano, who thrashed him in the first leg causing an earthquake in the azulón locker room. Quique was not yet at the club, but he remembered him to prepare for the clash. A way to motivate yours. In preseason they played a hot friendly with a tangana and Catena’s expulsion included and in Vallecas Iraola’s men went over Geta.

To receive Rayo, Getafe has a significant loss, the head of its defense, Stefan Mitrovic, who will serve a penalty for accumulating yellow cards. Without the Serbian, it’s normal for Okay to continue at the back after his good performance against Betis. The return of Jorge Cuenca makes things easier. In the rest of the team no big news is expected.

If Getafe has pending accounts against Rayo, the same could be applied to the rest of the games that remain this season. In favor of the azulones plays the fact that their rivals in the last four days hardly play anything, which is important at this point. Rayo arrives saved, Osasuna needs a miracle to reach European positions. Under normal conditions, Barça will arrive classified for the Champions League and Elche with guaranteed permanence. A friendly calendar for a terrible year that the people of Getafe want to close as soon as possible.