Many users indicate that it is a scam. Difficulties selling the Squid Game token could be due to some unusual conditions posed by the project’s white paper.

Users of a new cryptocurrency inspired by the popular Netflix series “Squid Game“, in Spanish “The Squid game“They are reporting difficulties to sell amid the explosive price increase.

The token SQUID, inspired by the eponymous series, has skyrocketed about 45,000% in price since its launch just over a week ago. However, some of the Investors who have acquired the currency have reported inability to sell, according to an announcement by Coinmarketcap, the leading cryptocurrency tracking website.

We have received multiple reports that users are unable to sell this token on Pancakeswap. Do your own due diligence and be careful when trading! This project, while clearly inspired by the Netflix show of the same name, is unlikely to be affiliated with the official IP.

In accordance with Coinmarketcap, the decentralized exchange (DEX) PancakeSwap it is the only marketplace available to trade SQUID at the time of this writing.

Many users of the crypto market rushed to buy the new one token, inspired by the latest worldwide Netflix sensation. The Korean series, which is about a deadly tournament between adults who play children’s games in hopes of winning a cash fortune, has become very popular in recent weeks. In fact, it has broken the record for the most viewed program on the platform streaming.

It is no surprise that in the wake of the program’s worldwide success, the new cryptocurrency inspired by Squid Game it has also registered accelerated growth. The token, based on the network Binance Smart Chain, was launched on October 20 and promises its holders to be able to participate in online games, inspired by the series, with the aim of winning cash prizes.

Since its launch, the cryptocurrency has seen an increase of more than 40,000%. According to data from Coinmarketcap, which listed the token this week, SQUID’s price jumped from $ 2 to a high of $ 9 in the last 24 hours, with a daily trading volume of $ 9 million. 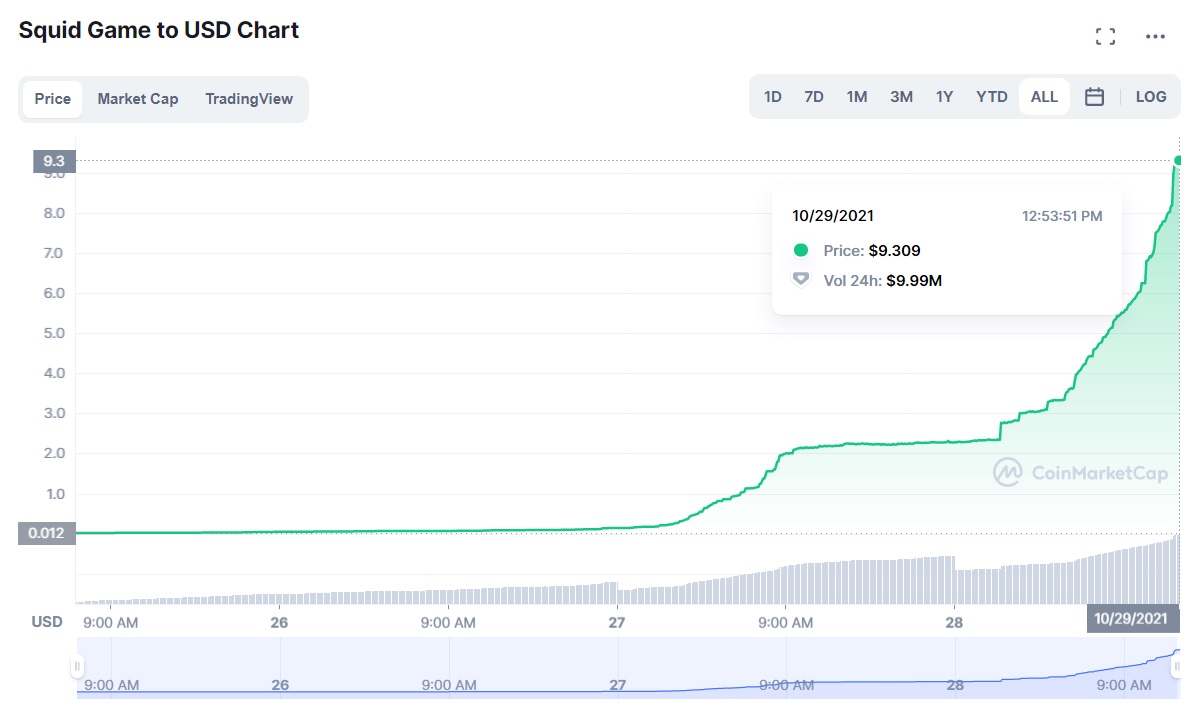 However, beyond the apparent sudden success of the new cryptocurrency, several reports have indicated that the project could be a scam. For example, some Twitter users have pointed the founders of the token Squid Game, That they mention on the project website, they are not on LinkedIn’s main professional network.

The official cryptocurrency page also mentions that CoinGecko, a cryptocurrency tracker site, is a partner in the project, something that the co-founder of CoinGecko, Bobby Ong, denied this Friday in conversation with the news outlet Cointelegraph. The project also claims to be associated with Netflix, OpenSea and other reputable companies.

Other community members pointed to other warning signs of fraud, such as the fact that the white paper, or white paper, the token has misspellings and bad grammar. Also, the fact that the official Twitter account SQUID was blocking comments from several users, and that the project does not have other accounts on social networks such as Discord or Telegram.

See also  Ethereum 2.0 expected in September, but there is skepticism among users

Meanwhile, a recent post by CNBC suggests that users’ difficulties in selling the tokens could be due to “anti-dumping technology“ which mentions the project whitepaper and which would prevent people from selling their coins if certain conditions are not met. A report from Cointelegraph quoted an excerpt from the SQUID whitepaper:

Other red flags: run away!

A report from Coinmarketcap also noted that such ‘conditions’ could underlie the participation policy, or staking (process in which funds are deposited from a token to receive rewards), from SQUID.

In this regard, the YouTube account of CoinFights explains that the SQUID white paper has a section dedicated to the sale of tokens that indicates that users must also own the token Marbles to be able to sell SQUID. It should be noted that Marbles is the other token of Squid Game that investors supposedly receive as a reward when they make staking with SQUID.

In a video dedicated to the new cryptocurrency, CoinFights it also collects other warning signs about the project. On the one hand, he said that the price graph of the token It looked weird relative to the usual cryptocurrency charts, and suggested that there might be buy orders scheduled for SQUID that are executed every minute. On the other hand, he indicated that after more than 24 hours doing staking with the token, he had not obtained any reward in Marbles, which was also suspicious.

Another red flag about the project is the fact that the portal honeypotDetector, which detects traps or decoys in BSC networks and Ethehreum, identifies SQUID’s smart contract address as risky. Also the popular scam verification source Scamadviser.com, the website of the token of Squid Game is suspicious with a punctuation 45 out of 100 confidence.