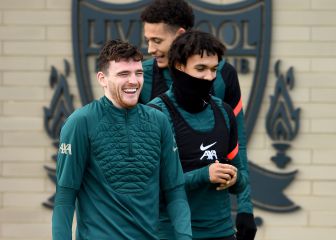 Andrew Robertson (28 years old) and Trent Alexander-Arnold (23) are the wings of Liverpool, who will face Villarreal this Wednesday at 9:00 p.m. for a place in the Champions League final. Anfield will host the first game of this historic tie for the team from Castellón, who defeated Juventus and Bayern Munich with confidence in the round of 16 and the quarterfinals, respectively. A feat by Unai Emery’s team that surprised many of the fans, but not Jürgen Klopp’s playerswho has warned them of the dangers of the Spanish team.

This was recognized by both the left-back and the right-back of Liverpool, who attended Diario AS at Wembley, after beating Manchester City 2-3 in the FA Cup semi-finals. networks They are already in the final of football’s oldest tournament and now they only think about doing the same in the Champions League, but they remain cautious. “I wasn’t really surprised by what Villarreal did in Munich,” Robertson confessed to this newspaperwho closely followed the match at the Allianz, but also the one played at the Cerámica stadium.

“When I saw the matches I thought that the Villarreal players were excellent. In the home game they led the game and could have scored a couple more goals. Then doing what they did against Bayern is not easy at all, and we know it. Especially after being behind on the scoreboard. They are going to go for the final and it is going to be difficult”, reflected the Scottish defender.

Following Robertson’s line was Alexander-Arnold, who didn’t want to hear about favourites. “Villarreal have played great football, they are very well organized and know how to play. In the Champions League there are no surprises and any team can eliminate you,” warned the Liverpool right-back and one of the players most appreciated by Klopp, who not only admires his quality, but also his character.

“We have to go win the round trip, and get to the final,” said Alexander-Arnold, which will be one of the main dangers for Unai Emery’s team. A highly valued coach in the red locker room, as Robertson suggested to this newspaper: “Emery has shown how good and how competitive they are.”

That’s the way it is, the accumulation of matches plays against Liverpool, which has four days less rest compared to Villarreal because he played his last game last Sunday, in the derby against Everton. “We have a very intense calendar…”, continued Robertson, who suspects that the duel will be full of alternatives, and that is why he concludes: “There are moments in the tie where you have to be better”.

Opposite will be the forwards of the yellow submarine and Alexander-Arnold took the opportunity to choose his favorite when he spoke with this newspaper. “Although all the players are very good, Danjuma may stand out above the rest,” explained the English defender.who is very close to lifting his second Champions despite his young age.

The network fans are already thinking about the final in Paris and Robertson is not willing to dissuade them. “You can dream, we will do our job”, finished off the Scotsman, who was also part of the English team when they won the Champions League at the Wanda Metropolitano. Since then, Liverpool has not suffered many variations in its scheme. In fact, he has reinforced it in the following transfer windows with the additions of Konaté, Thiago and Luis Díaz. The latter arrived in the last winter market and will probably be (he will be between the Colombian and Jota) the companion of Mané and Salah, two irreplaceable strikers for Klopp, who challenges Emery at Anfield.