Both zero-emission vehicles carry the design of one of the greatest icons of the automobile, the T1, into the era of electric mobility. A high proportion of recycled materials and the absence of leather in the interior complete the sustainability strategy of the ID. Buzz and ID. Buzz Cargo.

Both models will go on the market in the fall of this year in the first European countries; the start of advance sales is already planned for May. 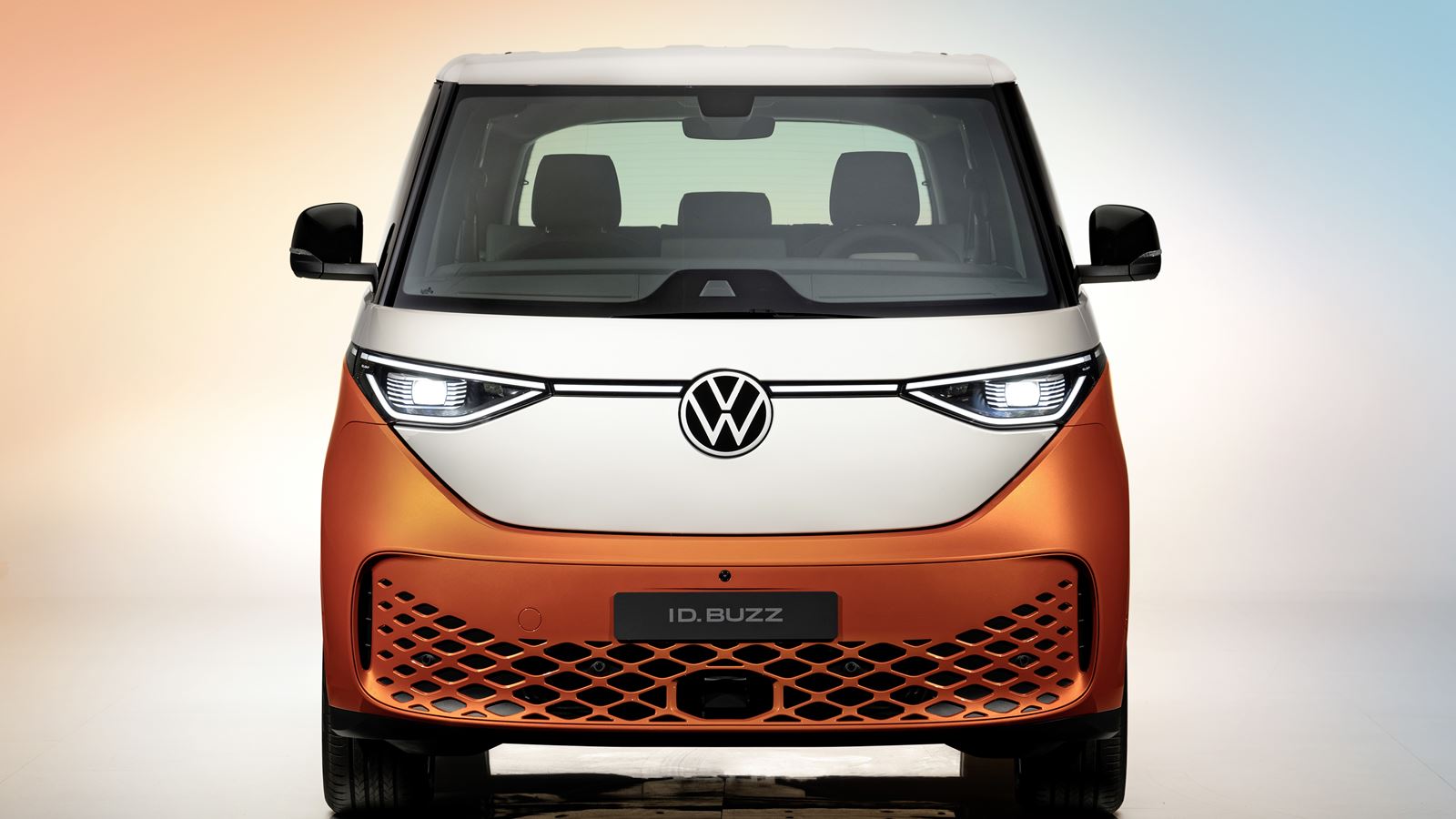 The two IDs Buzz offer more space than normal in a vehicle of this size: five people have ample space to travel and up to 1,121 liters of boot capacity. If the second row of seats is folded down, the cargo volume increases to 2,205 litres. In the medium term, a six and seven seater configuration and a long wheelbase version will also be available. For its part, the configuration of the ID. Buzz Cargo features three seats up front and a 3.9m fixed boot partition3. The maximum authorized mass of the ID. Buzz Cargo is 3,000 kg and the maximum load is 650 kg. Cargo can be secured using lashing eyes on the floor and lashing rails on the side walls. In both models the load sill will be at 632 mm. 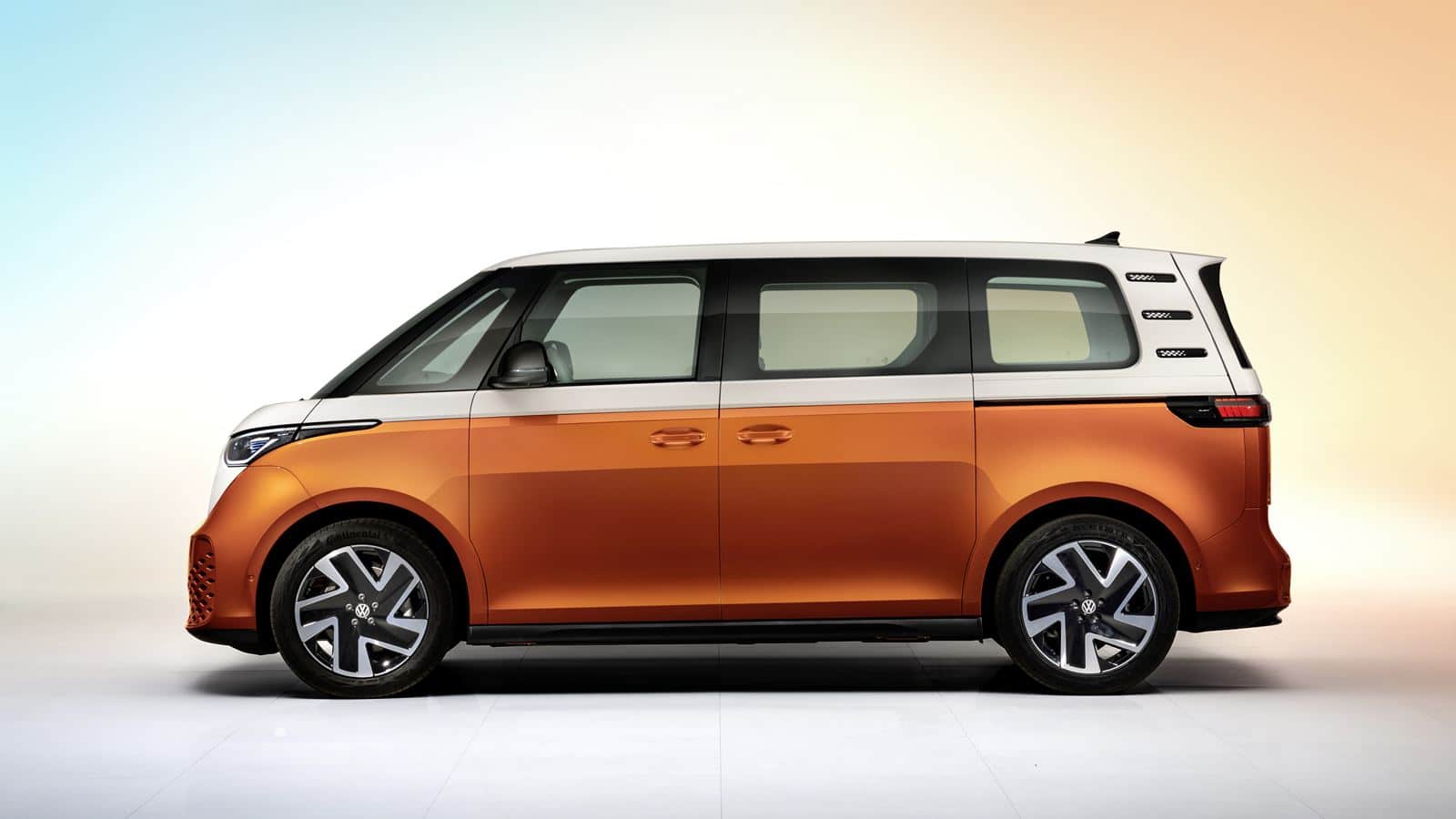 Volkswagen Commercial Vehicles will produce the new ID. Buzz and ID. Buzz Cargo at its parent plant in Hanover. Most of the electric propulsion modules for the ID. Buzz are also made in Germany, specifically in the independent area of ​​Volkswagen Group Components.

In the medium term, the passenger car version of the ID Buzz will also launch with a longer battle. The North American version of the ID. Buzz, with a bigger wheelbase, will start its journey from Volkswagen Commercial Vehicles’ main plant in Hannover across the Atlantic and reach customers in 2024. The ID. Buzz Cargo is not planned for North America. 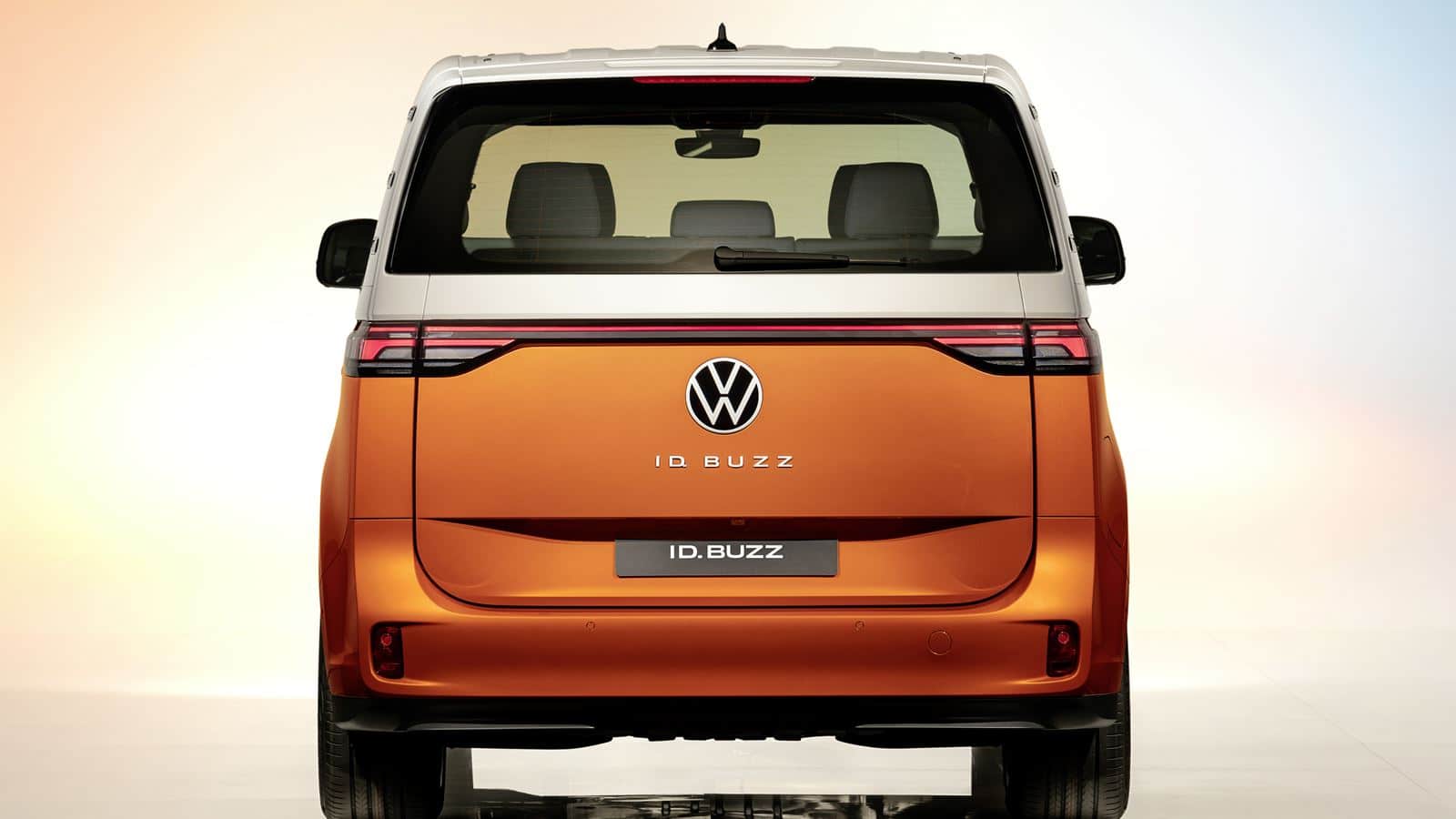 The new IDs. Buzz and ID. Buzz Cargo will go to market directly with this technology. Also, on all other models in the ID. with 77 kWh battery bidirectional charging will be possible in the future. For vehicles already delivered, this technology will be available successively through system updates. Power transfer and communication will be via a special DC-BiDi home charging station, where available.

The ID Buzz bets totally on LEDs. At the front, stylish LED headlights turn night into day in the top version called “LED Matrix IQ.LIGHT”. The narrow crossbar between the headlights is also designed as an LED strip. The VW logo, larger than the rest of current Volkswagens, is integrated into the center of the crossbar in homage to the T1. On the back, the ID. Buzz is distinguished from the T6.1 by the LED rear light clusters, which are arranged horizontally rather than vertically, and in this detail they show a clear proximity to the new Multivan. Unlike the Multivan, the ID. Buzz are connected by a continuous light strip for the first time in a Volkswagen Commercial Vehicles model. 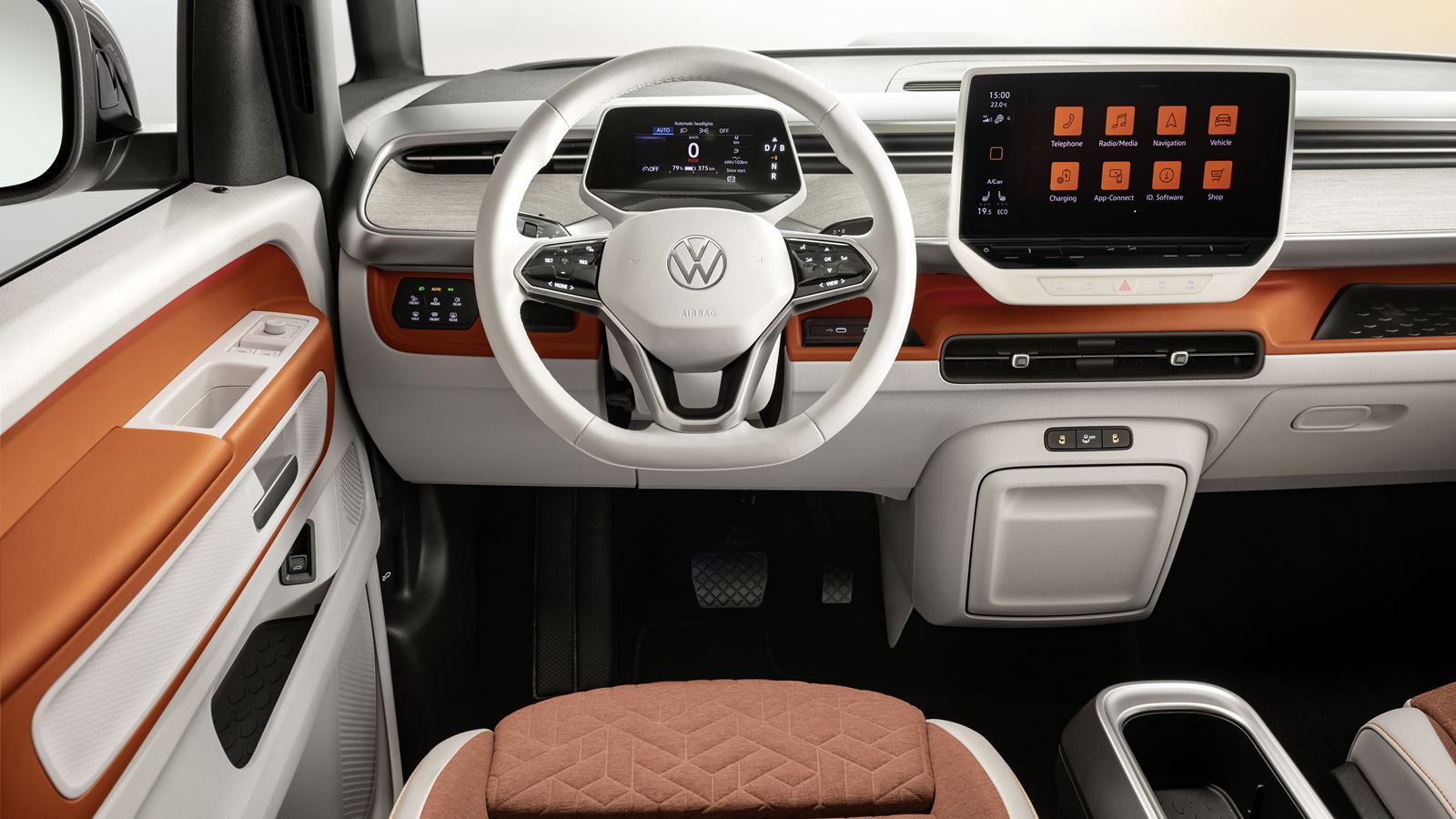 The welcome and farewell scenario of the optional matrix headlamps (Coming&Leaving Home) is interactive: if someone approaches the ID. Buzz with the vehicle key, the “Matrix IQ.LIGHT LEDs” and the LED rear light clusters flash briefly as a welcome. As soon as a door is opened, the ID. Buzz seems to welcome with a discreet sound and the activation of the «ID. Interactive Light» in front of the windshield.

The model boasts a turning radius of just 11.1 meters, which is unusually small for this class of vehicle. 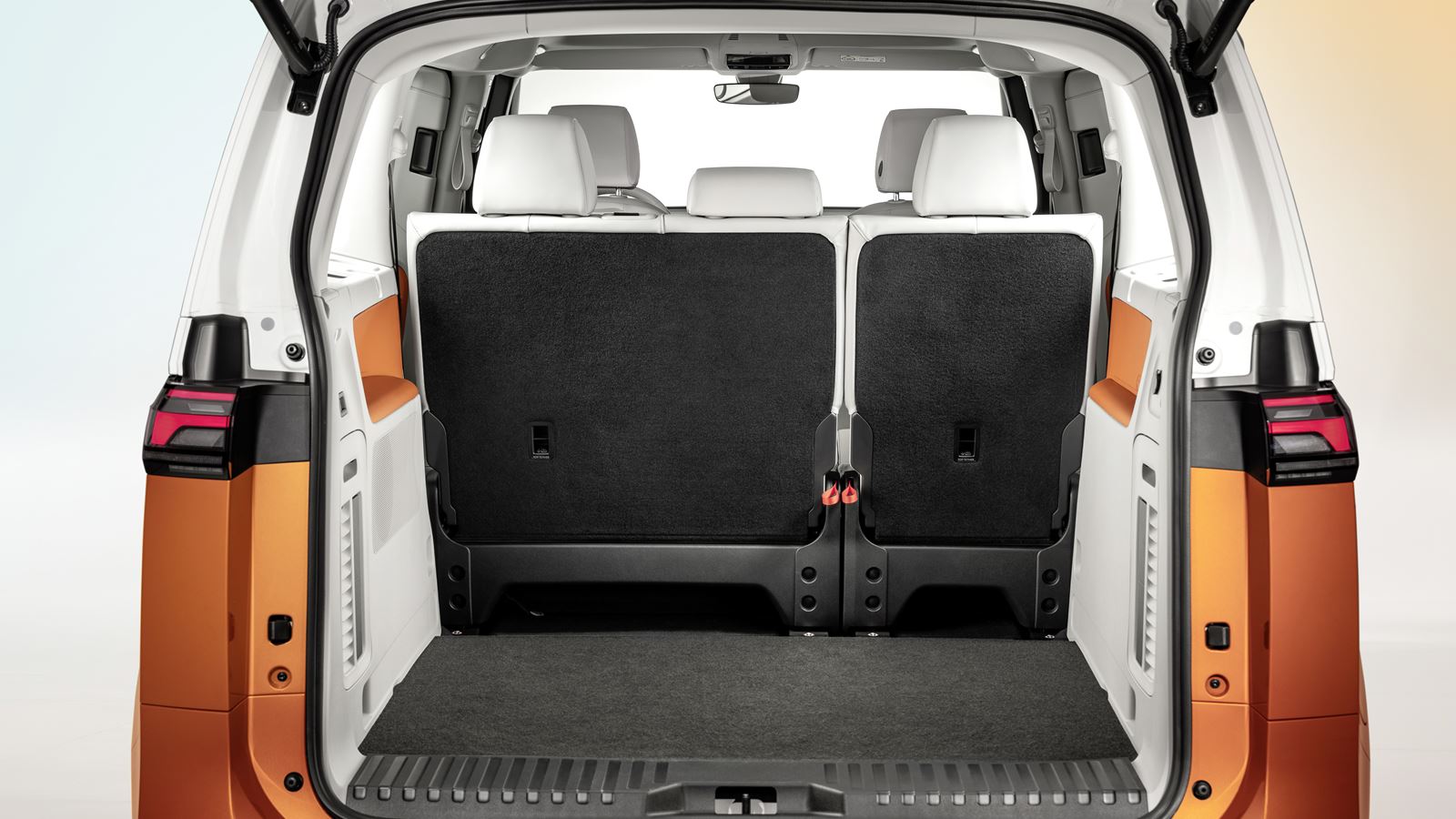 Volkswagen Commercial Vehicles will offer the ID. Buzz and the ID. Buzz Cargo with various two-color body paint finishes as an alternative to the basic colors. In total, the range consists of eleven different color variants: one solid color (“Candy White”), five metallic colors (“Monosilber”, “Lime Yellow”, “Starlight Blue”, “Energetic Orange” and “Bay Leaf Green”), one pearl effect paint (“Deep Black ») and four two-tone paint finishes. If the Zero Emission Bulli is ordered in one of the two-tone paint finishes, the upper area, including the roof and the V-shaped hatch at the front, will always be ‘Candy White’. In this case, the areas below the surrounding trim line will be optionally finished in one of four metallic shades ‘Lime Yellow’, ‘Starlight Blue’, ‘Energetic Orange’ or ‘Bay Leaf Green’.

By opening the doors of the ID. Buzz reveals not only a very spacious and typical Bulli interior with high seats, comfortable armrests, plenty of space and countless stowage compartments, but also a high-tech interior. 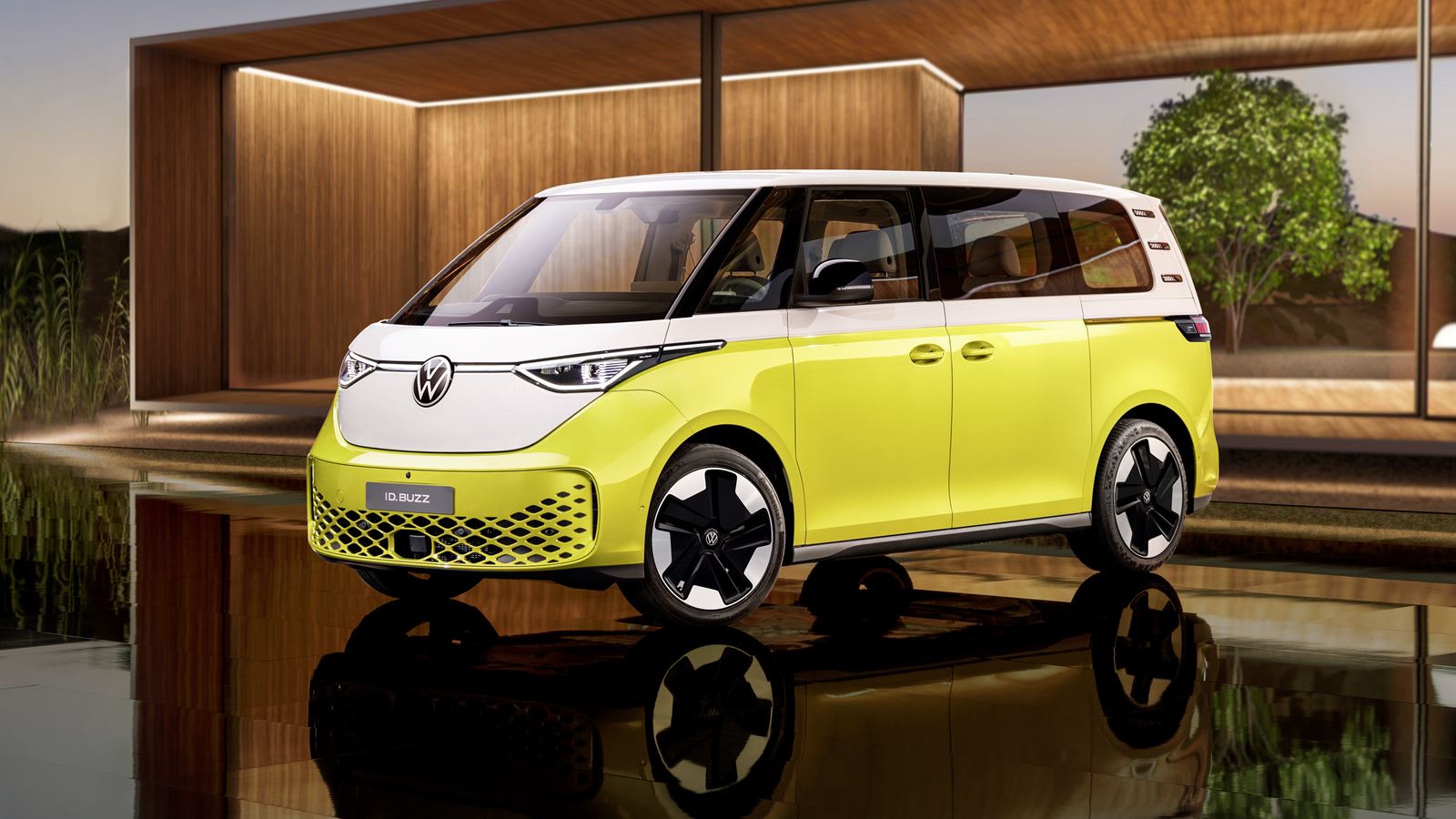 Analogous to the high seating position of the driver and front passenger, the instrument panel of the ID. Buzz is in a very high position, as is typical of a Bulli. All screens are digital and are located in an ergonomically optimal visual axis. The “Digital Cockpit” located in front of the driver consists of a large screen (5.3 inches diagonal). The infotainment system, equipped with a large touch screen, is located in the center of the dashboard. The system «Ready 2 Discover» as standard it is equipped with a 10-inch touch screen, the navigation system “DiscoverPro” optional with a 12-inch screen. 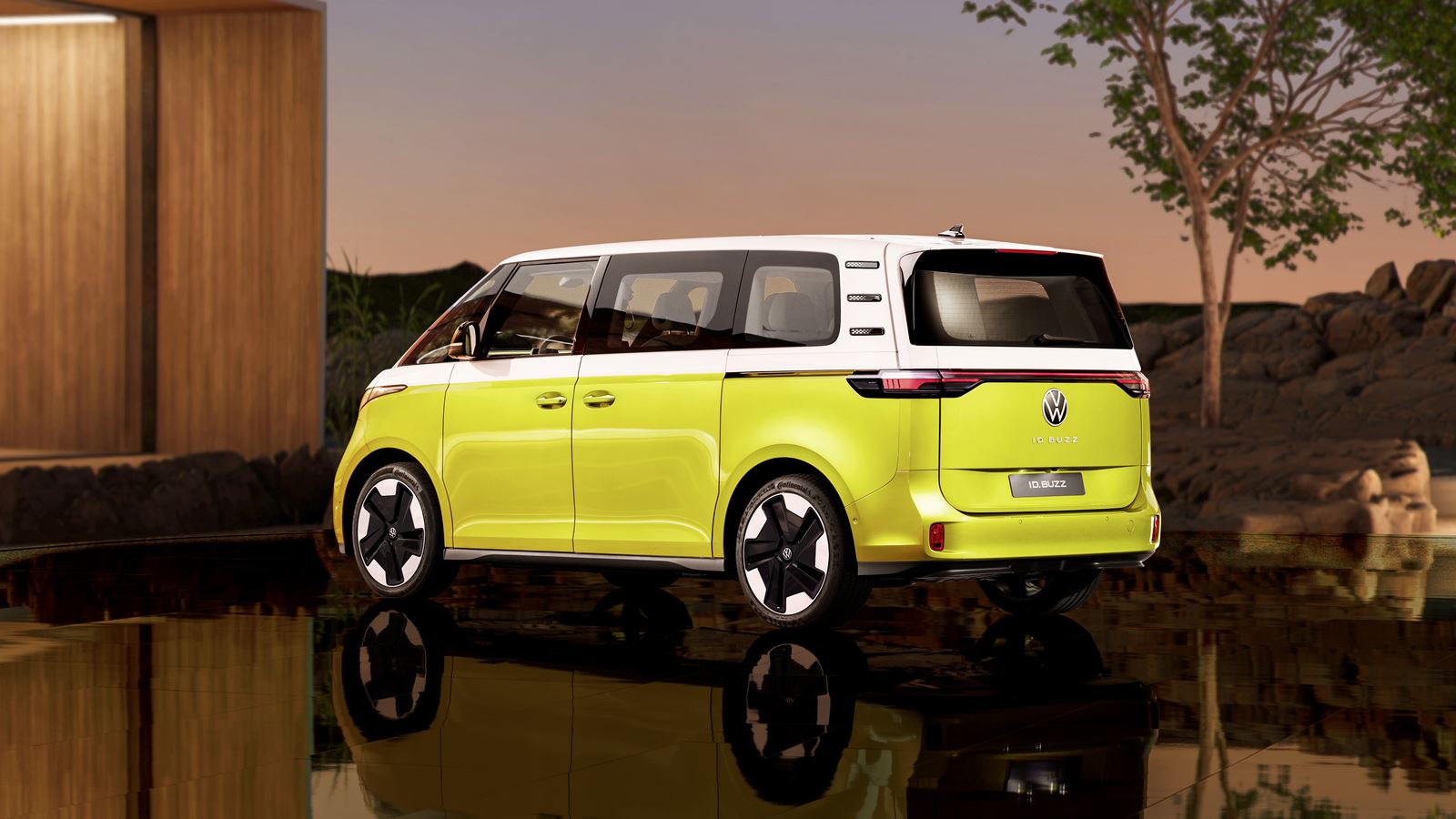 Beneath the infotainment system is a control bar with digital buttons and tactile sliders that are ergonomically easy to reach. Touch sliders control interior temperatures and infotainment sound volume. The push buttons activate menus for air conditioning settings, assistance systems, driving profiles and direct access parking entry/exit functions. The automatic gearbox is operated via a combination switch on the steering column: from neutral “N”, one turn forward to “D” to go forward, from “N” one turn backward to “R” to go backwards .

To the left of the multifunction steering wheel and its touch controls, there is a digital control island to activate the functions of lights, the heating of the front and rear windows and for maximum ventilation of the windscreen. The passenger car version is equipped with up to eight USB-C connectors. 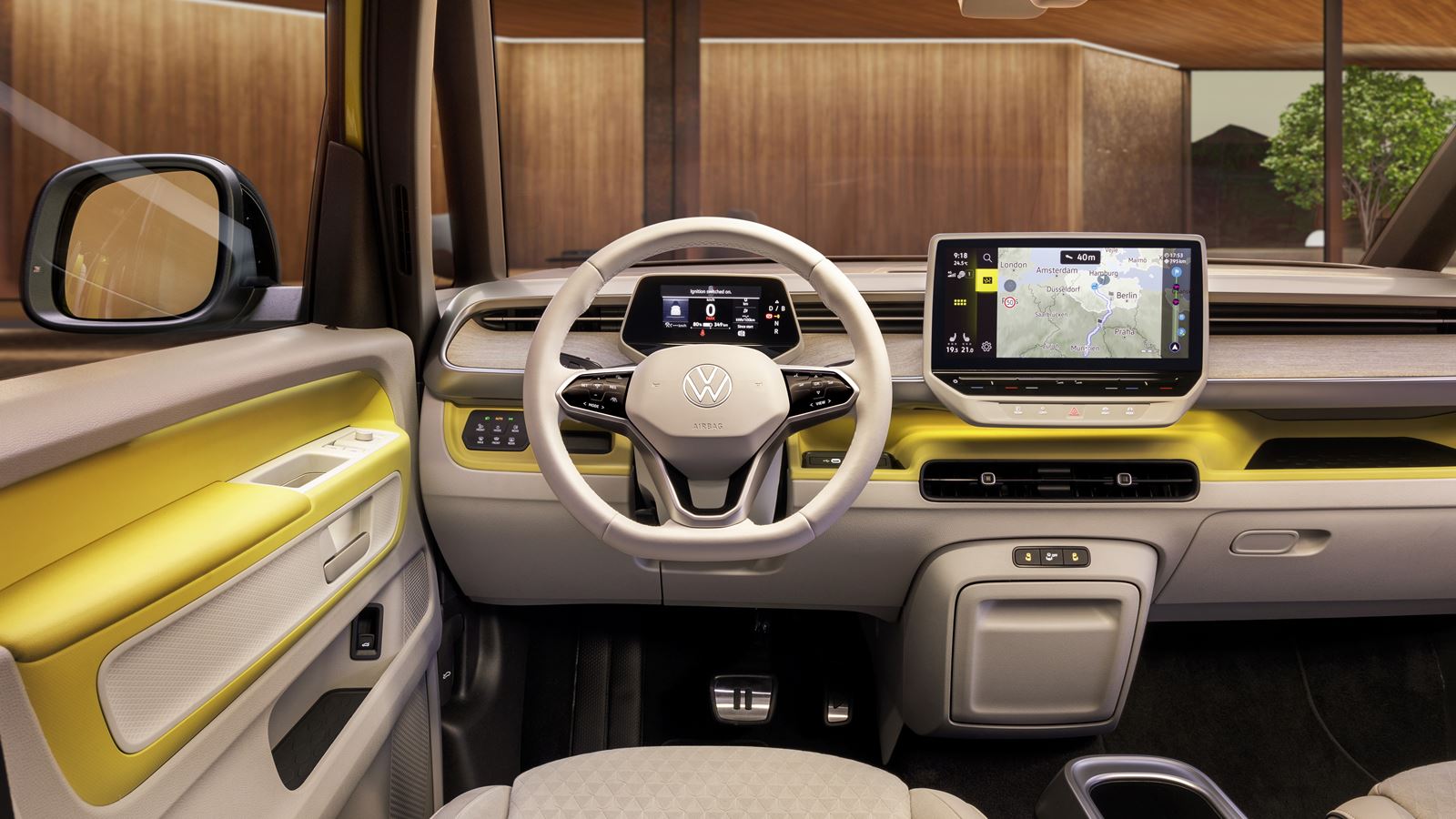 The ID. Buzz in his passenger version is equipped as standard with 10-color ambient lighting. Volkswagen Commercial Vehicles will also offer a 30-color version as an option.

In higher equipment versions, the front seats also have an armrest on the outside. A side airbag (thorax airbag), which automatically adjusts to the corresponding seating position, is integrated in the backrests of the front seats. In the driver’s seat there is also a central airbag, which protects the driver and front passenger from collision in the event of an impact. The higher versions of the seats will be fully electrically adjustable and will have a memory and massage function. The front seats can be adjusted up to 245mm in length and 61.5mm in height. In the second row, a comfortable three-seater seat with a distribution from 1/3 to 2/3 is used. It can move longitudinally a total of 150 mm. 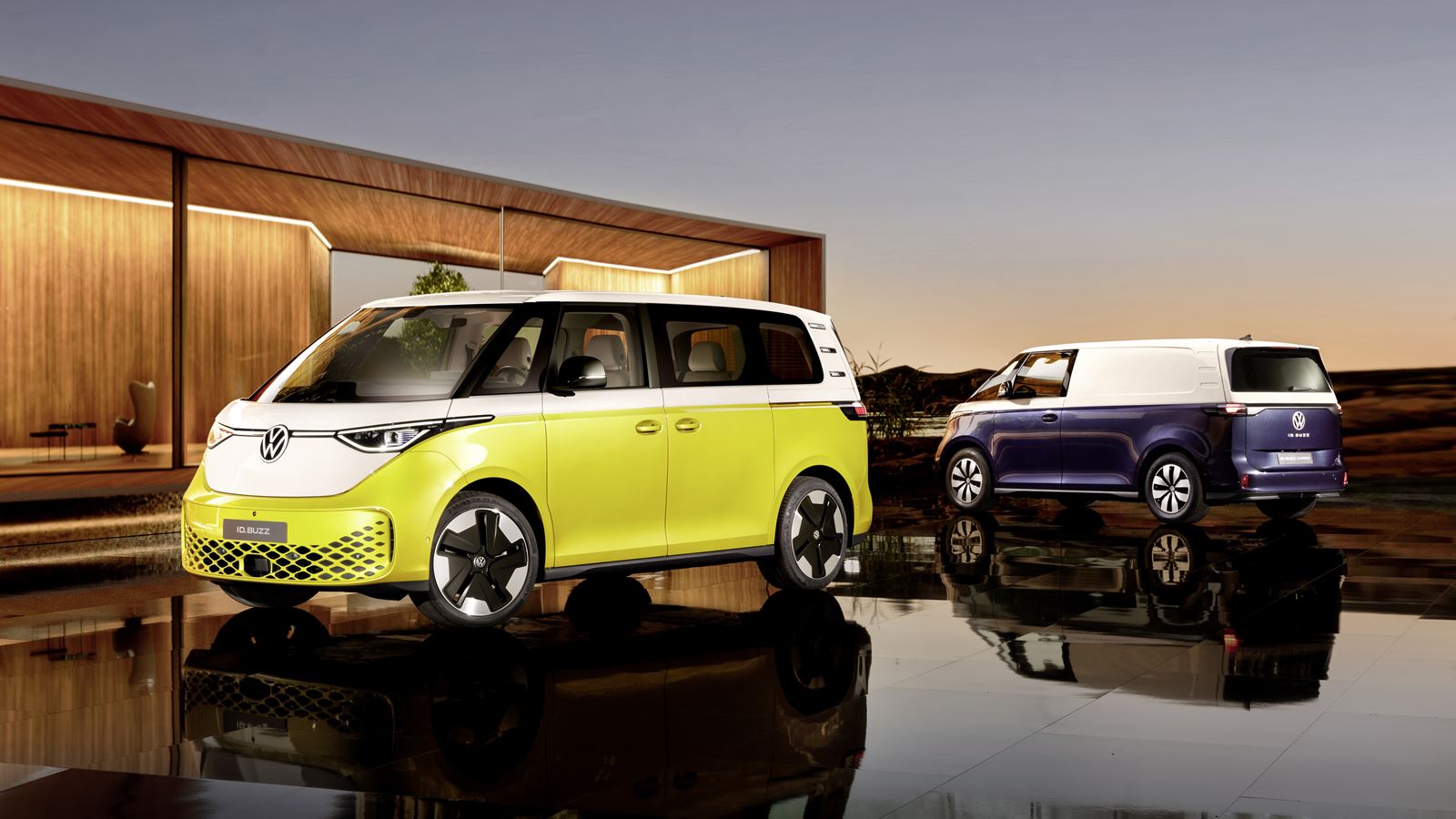 Volkswagen Commercial Vehicles has developed the removable “BuzzBox” especially for the new models. It offers a large storage compartment in the upper area. Always within easy reach: an ice scraper and a bottle opener. On the front there is a 1.4-litre fold-out compartment (for a water bottle, for example) and, on the front, a 5.0-litre drawer for utensils of all kinds. Another example of the attention to detail in the new ID. Buzz: When the drawer is pulled out, an embossed world map appears on its sides. For its part, the «BuzzBox» of the van (Cargo) is specially designed for use in the workplace.

The new model is technically based on the modular electric propulsion platform (MEB). The two versions of the ID. Buzz will hit the market in 2022 with a high-voltage lithium-ion battery that offers a net energy content of 77 kWh (82 gross kWh). With its twelve modules, the battery system feeds an electric motor of 150 kW (204 hp)which is integrated into the rear axle and drives it. 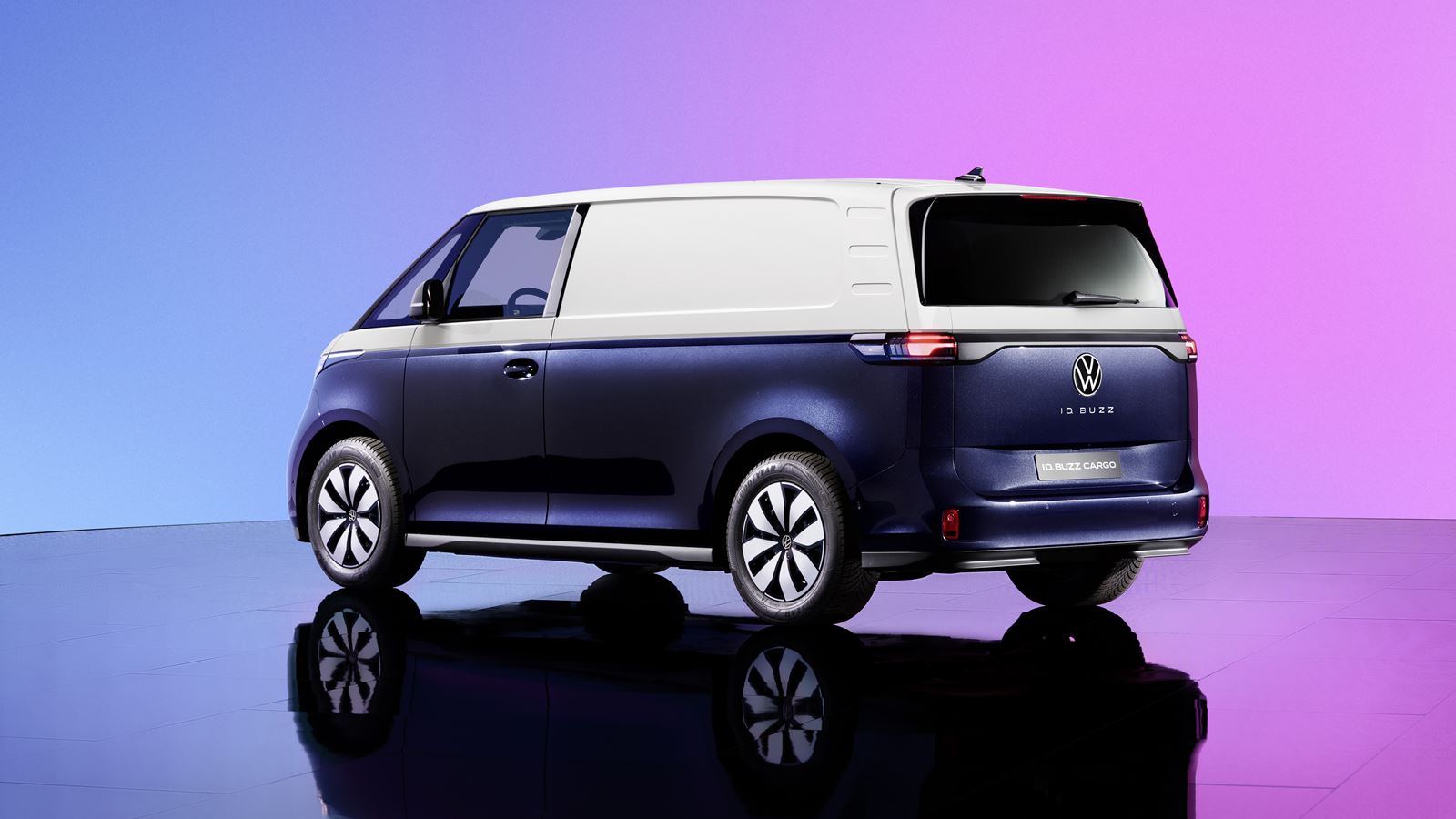 In the current configuration of both models of ID. Buzz, the top speed is electronically limited to 145 km/h. The fact is that the new ID. Buzz is a very agile vehicle. On the one hand, the electric motor reaches its maximum torque of 310Nm from scratch. On the other hand, this dynamic component is joined by a very low body center of gravity, since the battery is located very low in the double floor. In DC fast charging stations, both versions of the ID. Buzz draw power at a rate of up to 170 kW; the battery is thus charged from 5 to 80 percent in about 30 minutes.

Launch and market arrival of the Volkswagen ID Buzz

Volkswagen Commercial Vehicles will launch the ID. Five-seater Buzz in the “Pro” top-equipment version. The extensive standard equipment can be easily extended by means of various packages. The basic “Pure” version with an entry-level battery will come later. Also in 2022, the ID will debut. Buzz Cargo.