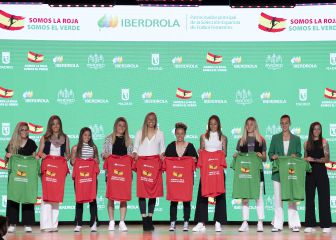 This summer Spain has a new date for history. With a year of delay arrives the Eurocopa of England. And the days are already counting, that’s why Iberdrola wanted to show its support for the National Team. “We are the Red, we are the Green”the motto chosen to start the countdown. There are 50 days left for the ball to start rolling in the continental tournament par excellence. It will be at Old Trafford on July 6although all eyes are on stepping on Wembley on July 31.

The ambassador of the act was Virginia Torrecilla. “The National Team is the favourite, I would never have thought of it. After what we experienced in the World Cup, we are going with everything. Since I have not been here, this team has been giving people something to talk about. After everything I have experienced, I have felt you are very close. Thanks for to have been with me at the time of illness”, she recalled emotionally.

“I made my debut against Denmark, with Alexia at 18 years old. We went out and they came from behind.” That will be one of the rivals in the group stage, like Germany. “He is a power, he gives me more respect. Sweden, France are always up there… I who lived in France before Spain was nobody. Now it is considered power”, added the Mallorcan.

See also  Asensio says goodbye to his agent: "You are part of my family"

Other internationals gave their vision. “Spain is in a sweet moment, we are going to the European Championship with everything”assured Lola Gallardo.

His partner, amanda sampedro, spoke of the change that has been seen. “When I was little I was excited about the boys, now they are going to do it with them. The children want to be like us.”

“I’m not afraid of anyone, we have a great team. We are going to win the European Championship”said the benjamina, Sheila Garcia.

Laia Aleixandri, Maitane, Menayo or Luciaamong others, were present at the event held in Madrid. Iberdrolawith tournaments in Malaga, Madrid Y Bilbaowill send the winners to London to live the tournament in situ. The dream of La Roja begins.