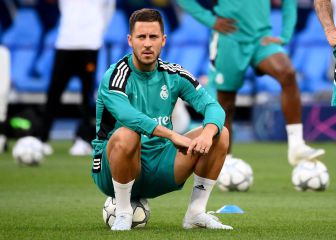 The national coach of Belgium, Robert Martineztrusted this Thursday that the Belgian striker and Real Madrid Eden Hazard can quickly “reset the machine” after his prolonged injuryto participate in two of the three games that the Red Devils will play this June and, if possible, the World Cup in Qatar at the end of the year.

In an interview with the Belgian newspaper Le Soir, Martínez celebrated that Hazard no longer has the osteosynthesis plate he had on his right fibula since his injury in October 2019 and lamented that with this plate “it was impossible for him to feel good and shine”.

And, asked if the striker can now recover the level he showed in the 2018 World Cup, Martínez affirmed that it is “a matter of rhythm” and that he will need to “play to feel good”.

“We know that he can restart the machine quickly, even at Real Madrid where he will always have competition.. She has enough experience to do it and with us he has a clear role.”

In this sense, he assured that he hopes that he can play in two of the three games that Belgium will play in the League of Nations in June. (Netherlands, Poland and Wales) and said that “if after this he can play another fifteen in the World Cup, it would be perfect”.

On the other hand, he referred to the Real Madrid goalkeeper’s season Thibaut Courtois, who will miss the next matches with Belgium due to his pubalgiaand recognized that, although it is very complicated for a goalkeeper win the Ballon d’Or, “this could change with Courtois”.

“What I love in his case is the recognition from the Real Madrid fans. For a foreign player it is never easy to be so adored in Madrid, especially in a club with a long tradition of local goalkeepers, like Casillas or Buyo.”said.

Regarding his own future, he recalled that his contract with the Belgian national team lasts until 2022 World Cup and he preferred not to venture what will come next, although he declared himself open to “discussing” it with the Federation.

“Everything will depend on how things go during the Nations League and the World Cup.. You know, if things go wrong in Qatar all the Belgians will want me kicked out, but if we win I will want to stay four more years to shout in every interview that we are champions,” he joked.