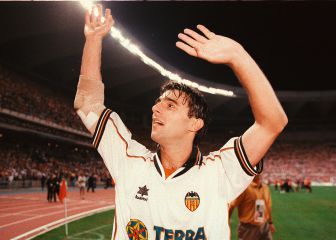 When he arrived at the age of 32 in June 1997, many thought he was doing it to retire. And yes, he did, but nine years later. Carboni played his last game for Valencia at the age of 41 years, 1 month and 10 days. The era of League titles, Cups and European finals cannot be understood without the figure of Carboni, one of the most influential foreign footballers and, at the same time, with the greatest feeling of belonging in Che history. 350 games, 333 starts, 2 goals and 19 assists. In total, seven titles. He started in the final at La Cartuja, as in 50 other games that season. After retiring, for a few years, he continued to be linked to Valencia as Sports Director. Today he works as a consultant for clubs and agencies, as well as a TV commentator in Italy.