They are faster than cars to move around the city and safer against the covid-19 than public transport. Motorcycles up to 125cc are presented as a viable alternative in the new mobility because, in addition, it is allowed to drive them with the car license. And for that reason –among others, such as an adjusted price and the agility of use in the city–, small scooters are the most successful type of motorcycle.

In fact, the ten best-selling motorcycles of 2019 were 125cc scooters, including the electric one Silence SO2 (approved as such) in fourth place. The top three places in the standings were taken by the Kymco Agility City 125, the Honda PCX 125 and the Honda SH125i Scoopy. According to data from Anesdor, the employers’ association in the sector, the total market for two wheels reached 202,079 units, 12.1% more than in 2018.

The figures will change this year, because the slowdown caused by the coronavirus crisis has seriously affected the bikes, but it is also not unreasonable to think of a more or less rapid recovery probably based on scooters and may have been helped by the appearance of debutant motorists.

This type of motorcycle, however, is not the only one that can be driven with driving license B. As long as they have more than three years of driving experience, motorists also have the Gear motorcycles of less than 125 cc and those approved as tricycles, with an increasingly wide market offer.

The exact specifications are included in the General Regulations for Drivers: people “who are in possession of the valid Class B permit, more than three years old, motorcycles whose authorized driving class A1 permit ”. This is: motorcycles with a maximum displacement of 125cc, a maximum power of 11 kW [14,75 CV] and a maximum power / weight ratio of 0.1 kW / kg.

See also  Audi RS6-S and RSQ8-S, the new beasts of ABT

Regarding three wheel motorcycles, with the B card they can all be driven, but the regulation makes a small nuance: “Until the age of twenty-one will not authorize to drive motor tricycles whose maximum power exceed 15 kW [unos 20 CV]”

What models can you drive

Scooters. They are the most common models among bikers, whether they have the specific permission A1, already have only the B card. They don’t cost as much as other types of motorcycles, they weigh little (between 100 and 150 kilos) and they are easy to handle for inexperienced drivers. They have no gears and in addition they do not consume much. These are the five best-selling models:

125 cc motorcycles. Naked, custom, sports, trail … The options for motorists among 125cc motorcycles are many, but they are less popular because their handling is somewhat more complex for the simple fact of having to use the clutch to shift gears. The most difficult to drive are probably sports, since the position of the handlebar requires a less natural posture. All of them are also more powerful that scooters and require more careful driving to the inexperienced. These are several examples to consider:

Tricycles. The B card also allows vehicles approved as tricycles to be driven, that is, three-wheeled motorcycles with cylinder capacities greater than 50cc. So, the car license enables them to drive even though some exceed 125cc. And this allows motorcycles to be driven with greater power, because the two wheels located on one of the axles –generally the front one– rotate symmetrically: They are less agile and heavier, but also more stable and faster, and generally more expensive. Count on a system that keeps them going on their own and the rear brake is actuated in a complementary way by a pedal, that complements the action that can be performed with the handles on the handlebar.

The Qooder, on the other hand, is a unique case on the streets. Although it has four wheels, it is homologated as a tricycle. Thanks to a patented system, it tilts all wheels simultaneously to offer sensations typical of a motorcycle, but with a security contribution extra. Its engine cubes 400cc and develops a maximum power of 32.5 HP. It costs 11,499 euros. 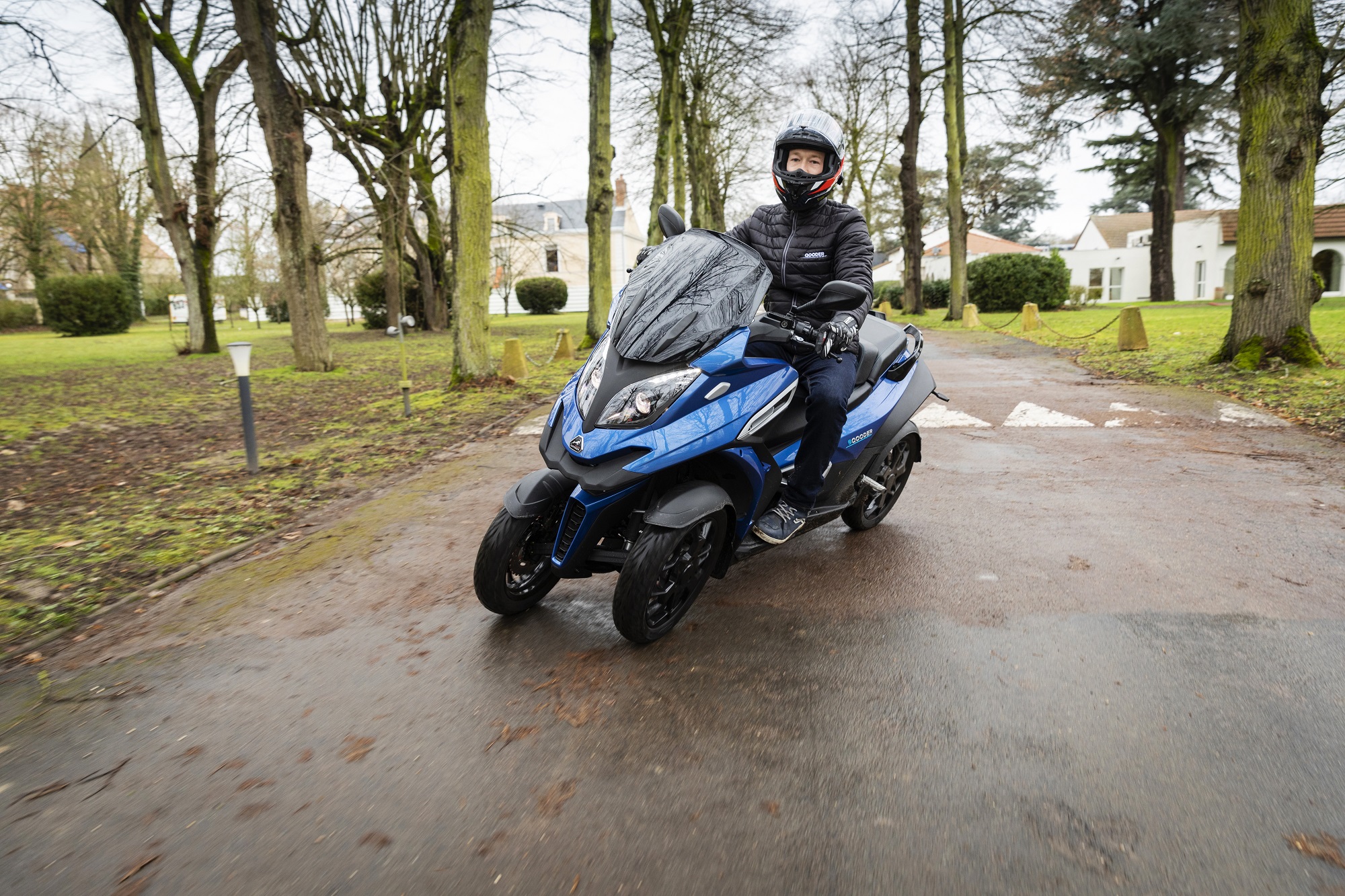 Safety and efficiency is what the new eQooder proposes. / Philippe Dureuil

In 2004 motorists with the B permit were allowed to drive motorcycles with the main objective of reducing traffic in large cities. As a negative counterpart, accidents increased. A study by the Barcelona Public Health Agency found that the number of motorists hospitalized in the city grew 87.5% between 2003 and 2006.

And a much more recent report, with data from 2015 to 2018, looks at one particular detail: the 29% of motorcyclists involved in an accident with victims was driving a motorcycle less than 125cc and had only the driving license B. The percentage is even higher in some age ranges, reaching 39.2% in the case of drivers between 25 and 34 years old.

The study by Formaster (Professional Association of Training Companies in Road Safety) reflects, on the contrary, that those involved in accidents with the same type of motorcycle but with a specific license they reach only 9%.

That is why some people consider it a mistake to get on a motorcycle without previous experience. As a minimum recommendation, the Royal Automobile Club of Spain (RACE) aims the idea of ​​acquiring the necessary ease “Practicing in places without traffic such as an empty parking lot or streets in residential areas under construction. “

In addition, the drivers club offers some basic tips for beginners, such as always using helmet, gloves and suitable clothing –with specific protection for motorcyclists–, practice careful, prudent and defensive driving (anticipating the intentions of other users) and often look out for rear view mirrors, especially in the city, where more users and contingencies surround motorists.