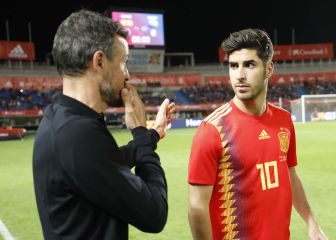 The question in the press conference to Luis Enrique was clear. “What are you seeing in him this season to call him?”they told the coach in Las Rozas an hour after learning that Marco Asensio was returning to the National Team after eighteen months without playing in the Spain shirt. His last game was 6-0 against Germany in Seville, in which he came on in the 73rd minute.

“What I have always seen in Marco Asensio when he has come with us. He has been here for very long periods of time and it had been important. It is true that now in his team he is not acting too much. I always tell you that to What I see in the clubs is very important to me, but it is more important what they already do when they come here with us. He hadn’t come for a long time, perhaps even the surprised one could be him, but if I review his level, what I expect of him and what he has done with us in the National Team, he is an interesting player. We are not going to fool ourselves either, there are casualties in his positionLuis Enrique explained.

Since Luis Enrique’s first call with the National Team, in September 2018, Asensio was international in the following five breaks (the last two, with Robert Moreno). After that, she was seriously injured and did not return until November 2020, an oasis in these last three years.

The good memory that Luis Enrique de Asensio has cannot be from the goals, since his goals with the Spaniard’s Spain are limited to one in 2018. His numerical record does not exceed more than 1 goal (the only one with the Absolute) and 4 assists in seven games. However, Luis Enrique is a player who fulfills him and of these seven games he has been a starter in four of them. Only once, and it was in a friendly, he left him without minutes.

“Opportunities are there to be seized”, the coach ended up saying, after assuring that the losses have also helped him have a place in the list of 25. With this phrase, he alluded to the absences of Oyarzabal, a fixed player who tore his anterior cruciate ligament in March; and Yeremy Pino, who played his last game on April 19. In addition, Gerard Moreno has finished the season touched.

This is great news on a personal level for the player. Luis Enrique commented that even Asensio himself could be surprised by the call. A bet like this for his undeniable talent should help him improve his self-esteem ahead of the Paris finalwhere it could be required by Ancelotti in the final minutes.

The Mallorcan has been key throughout his career, participating in goals in important games. Specifically against Liverpool, he scored one of the goals in the 3-1 first leg of the 2020-21 Champions League quarterfinals. In addition, you already know what it is to score in a Champions League final after scoring Cardiff’s fourth and final goal in the final against Juventus in 2017.