You have already seen it through my articles, for several years I have liked to spend my birthday in a nice setting, in France or abroad. After Egypt and New Caledonia, I rather wanted cold and snow. But who says snow in February, especially says a lot of tourists! And I tourists don’t like it. Exit therefore all the big stations, we privileged the Swiss region of the Bernese Oberland, south of Thun, for its calm and the beauty of its landscapes. On the program, a beautiful snowshoe hike at the Stockhorn, one of the many peaks in the region, renowned for its incredible panoramic view of the region.

Our adventure began on Friday evening, on the way to our guest room. While it had snowed a little all day, the situation worsened in the evening forcing us to ride carefully on the snow which was piling up, slowly but surely, on the road. However, the village where we were staying was not at an altitude and the numerous snowplows crossed testified to the intensity of this precipitation. It was pitch black when we arrived, preventing us from seeing the full extent of the snowfall in recent hours.

But when we wake up, what a surprise! A magnificent white carpet covered the valley. If I had been afraid of the lack of snow the previous days, all fear was dispelled in the face of this enchanting sight. I could not wait, take advantage of the beautiful day ahead!

On the recommendation of our hosts, we decided to climb the Stockhorn, the emblematic summit of the region, and the one offering the most winter activities with among other things several snowshoe trails. From the village of Erlenbach, the cable car, which took us to the top of the Stockhorn in half an hour, promised us a breathtaking view of the valley.

Personally, I am a big fan of cable cars. This feeling of flying above the peaks delights me, even more when the landscape is completely white! Well wrapped up in my 15 layers of clothes, I silently enjoyed this first show of the day. While the morning mist still clung to the roofs of the thatched cottages, it only takes a few minutes for us to rise above the clouds and admire the awe-inspiring scenery around us. 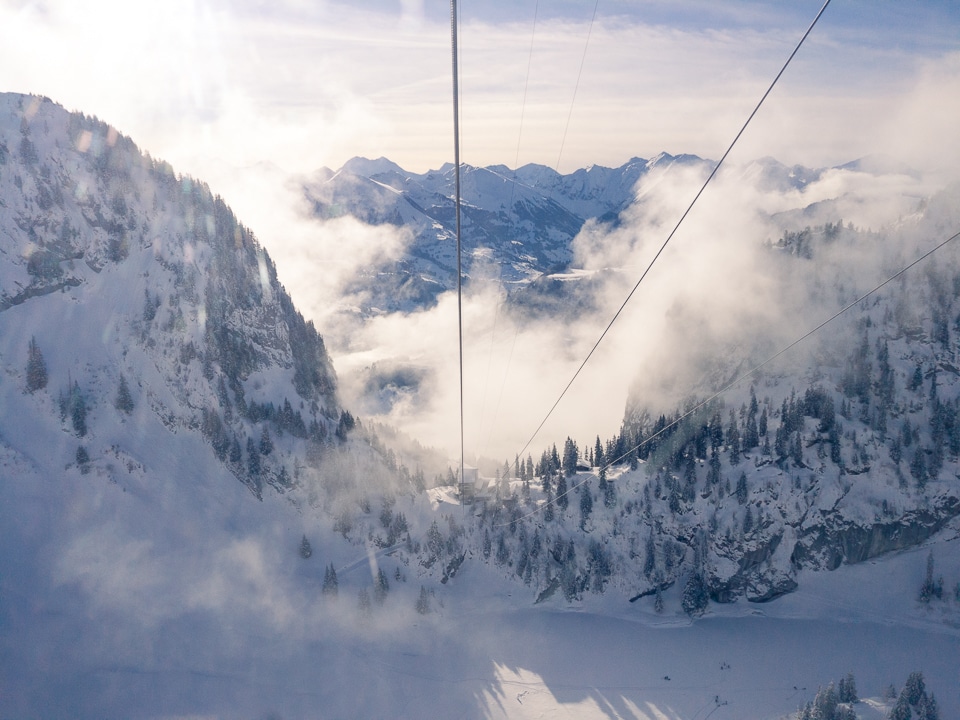 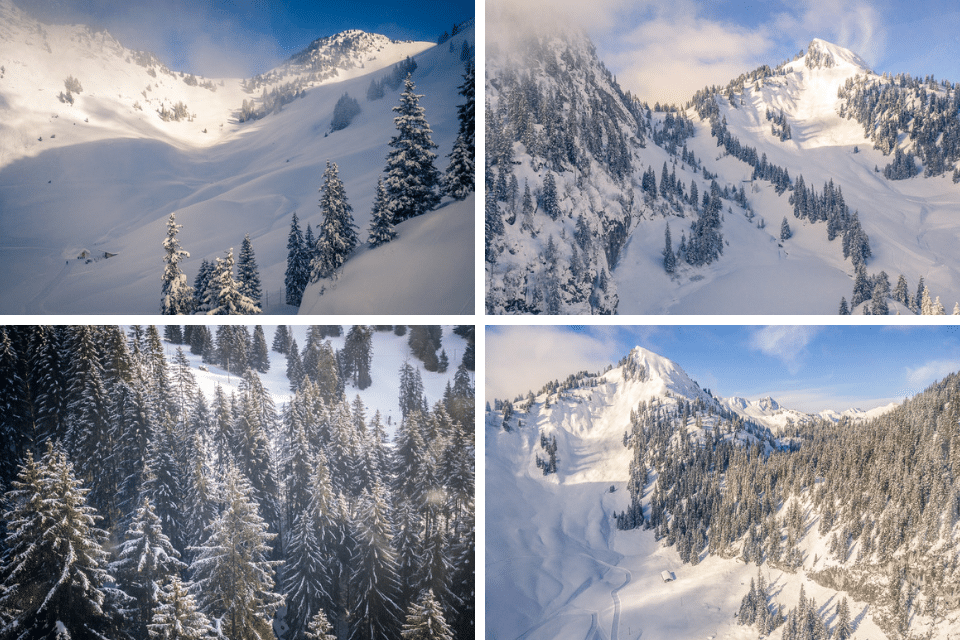 This first appetizer set the bar very high, yet the view from the Stockhorn lookout succeeds in winning the battle for the best view. The panorama is simply incredible! I let you imagine a large terrace with a 360 ° view of the peaks emerging from the mist. Below, we could barely make out the goal of our expedition in the middle of the snow. Two frozen lakes, white on white, tone on tone, where only the small silhouettes of the first ice fishermen allowed to define the outlines. Through the clouds, a few timid breakthroughs let us glimpse the shores of Lake Thun. Unless it is its neighbor, Lake Interlaken… Impossible to know, the mystery remains unsolved. 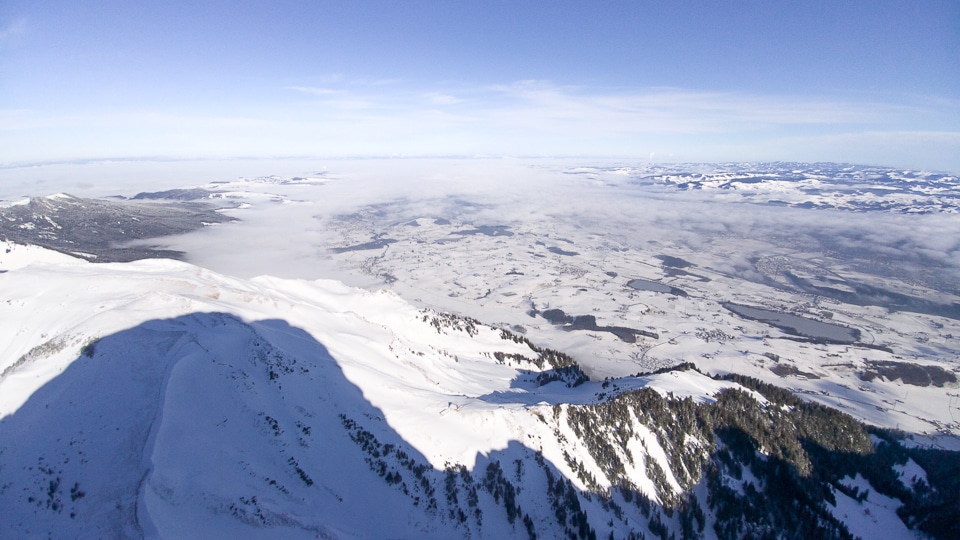 I was really happy on this terrace of the Stockhorn contemplating the infinitely white, the infinitely large. But it was starting to get extremely cold too! Our phones, already half-discharged, were telling us 11am already! We had no time to waste if we wanted to make our snowshoe trip and be able to return before night fell. 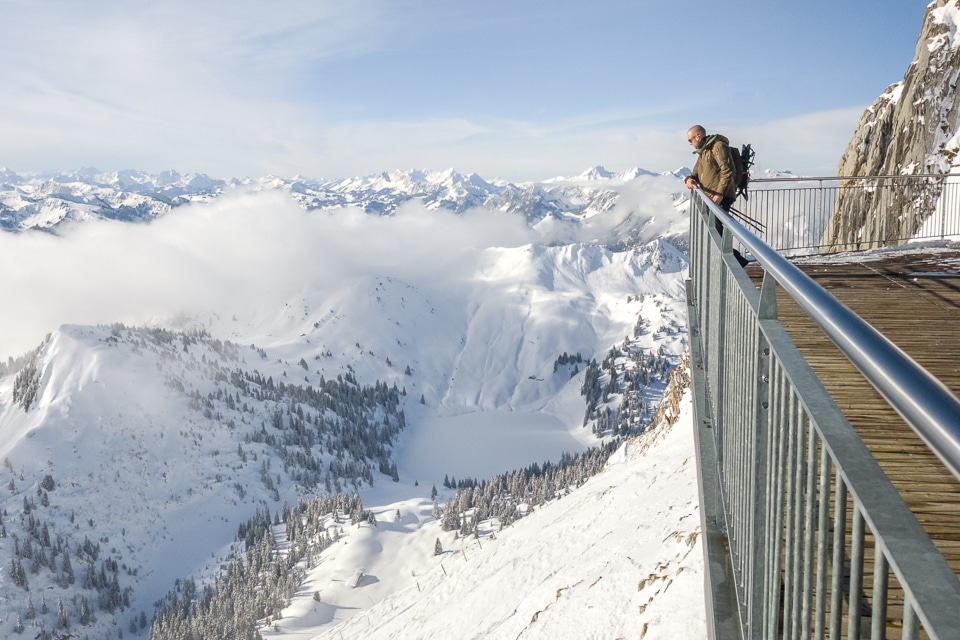 Snowshoe hike at the Stockhorn

The leaflets indicated a hike of about 6 km and 3 hours of walking. Being used to walking, and with snowshoes, we had not even considered that the recent snowfall the day before could impact the quality of the trail… fatal error, we were going to discover it at our expense.

See also  The most beautiful diving spots in Australia

From Chrindi middle station, the trail gently winds along the lake shore. The thick patches of snow on either side of the newly groomed trail bear witness to the depth of snow that fell the day before. Still virgin of human footsteps, I have the impression of having been teleported into this magical setting. I am completely under the spell of this immaculate landscape, sprinkled with shiny sequins under the rays of the sun. 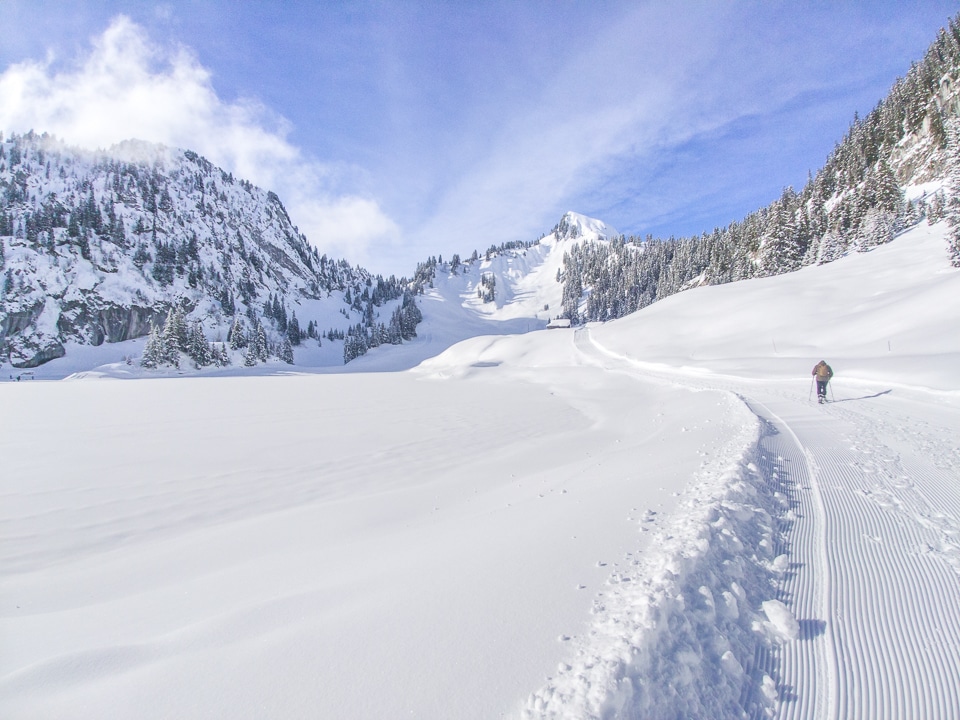 The path then branches off into the forest to reach a plateau a little higher. Already in the forest, the markings were not easy to spot under the snow, what was our surprise when we arrived on the plateau! The trail was not groomed, and no one had tracked it yet. It was as scary as it was beautiful! Only a sign that emerged from the snow a hundred yards in front of us, indicated the presence of a path somewhere under our feet. The co-hiker, not at all afraid of the amount of snow and the difficulty of walking in the powder, made the trail in front of me, while I tried to follow in his footsteps. Until then, the beauty of the landscape completely obscured the difficulty of the course and our efforts to advance made us completely forget the ambient cold. 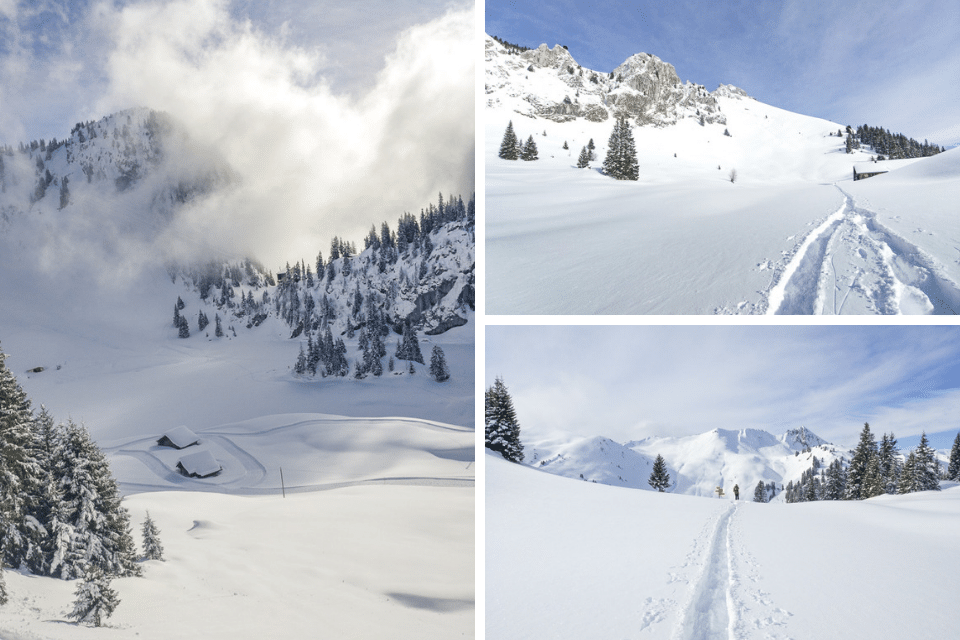 At the sign, the second lake that we had been able to discover from the Stockhorn terrace was revealed in front of us… as well as the absence of a path to reach it. Too bad, we came here to take advantage of it, and even if we weren’t going as planned because of the snow, we weren’t going to turn back now, no but oh! 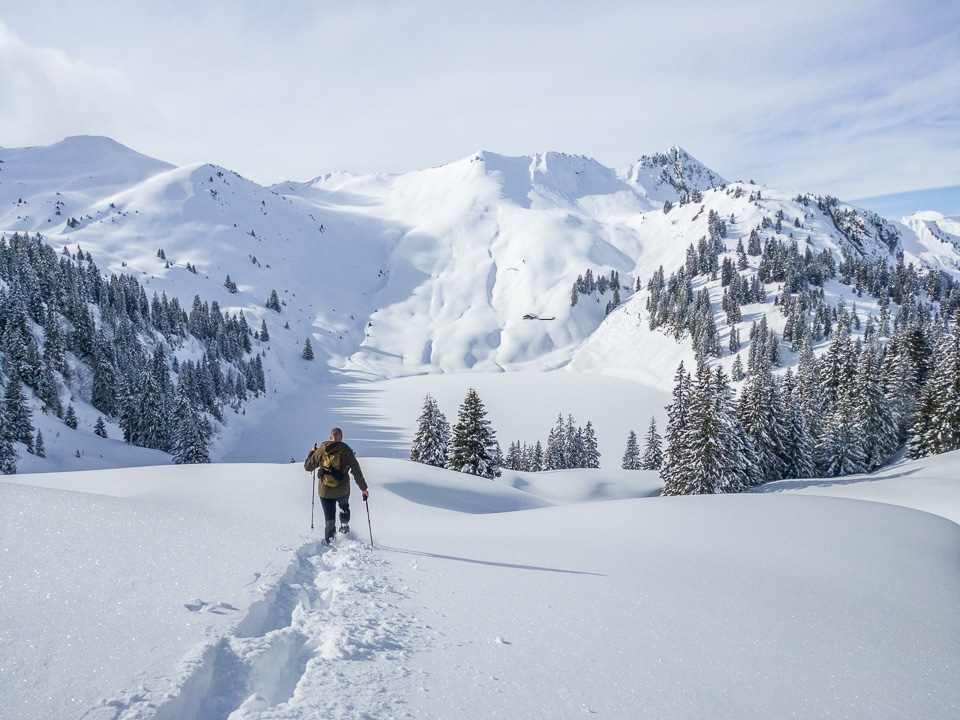 This is how our stupid stubbornness led us straight to disaster. We did not imagine that possible, but because of the wind and the basin formed by the lake, the snow must have found it nice to come and pile up here … and despite our snowshoes on our feet we sank until halfway. thigh in powder snow. A hard time ! Not to mention the fact that we absolutely did not see the limit between the ‘pseudo path’ and the lake, I was terrified to find myself walking on the lake without knowing it! But you think we weren’t going to turn around after all our efforts. On the other side of the lake, it would necessarily be better. The amount of snow could not be so great everywhere. There was bound to be a place where we would find a groomed trail, easier.

When we got to the other side of the lake, when we had to go up to the pass from where we could then return to the first lake, the slope was very steep. Too steep. And despite our mutual efforts to move forward, we burn out without really making progress. One step forward, and we slide two steps back. No grip to hold onto to facilitate our efforts. It was hopeless. And above all, since the morning, we had not seen ANYBODY. We were completely alone. Scary. 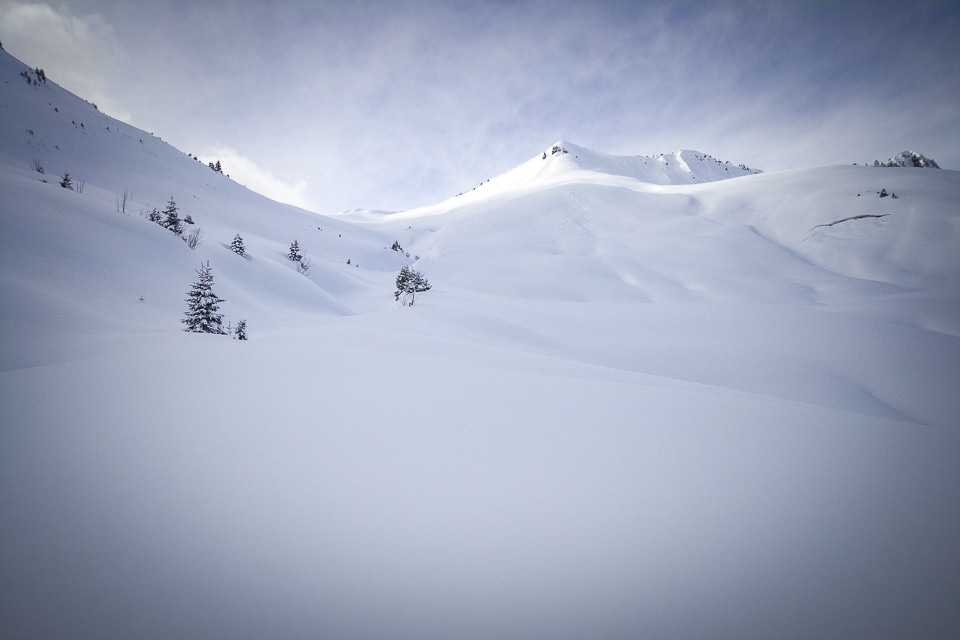 A quick glance at our phones, which were discharging dangerously quickly, told us that it was already close to 2pm! The 3 hours announced for the hike were already reached and we were not halfway through! At this observation, under the effect of cold, hunger and fatigue, panic invaded me. It may seem exaggerated to you, but I assure you that at this moment, the buttocks in the snow after yet another slide, the frozen hands and a pair of glasses lost somewhere around us (but impossible to find in the snow !), I collapsed, convinced that we could not get back in time to take the last cable car, 2 hours later. I hadn’t found anything better than a good big panic attack to try to get me out of this bad patch. It would have been almost funny if it hadn’t been so dire. Especially since, leaving for a 3 hour hike, we had absolutely no plans to eat or to light a fire or to melt snow.

After further unsuccessful attempts to move forward, we were completely stuck. Impossible to climb any higher due to the steep slope and the amount of snow, not to mention that we had no idea what terrain awaited us on the other side of the pass and if we could descend. We had to face the facts, we could never complete our loop on time. The only option we had left was to turn around and hope it would take us less time than on the way there. 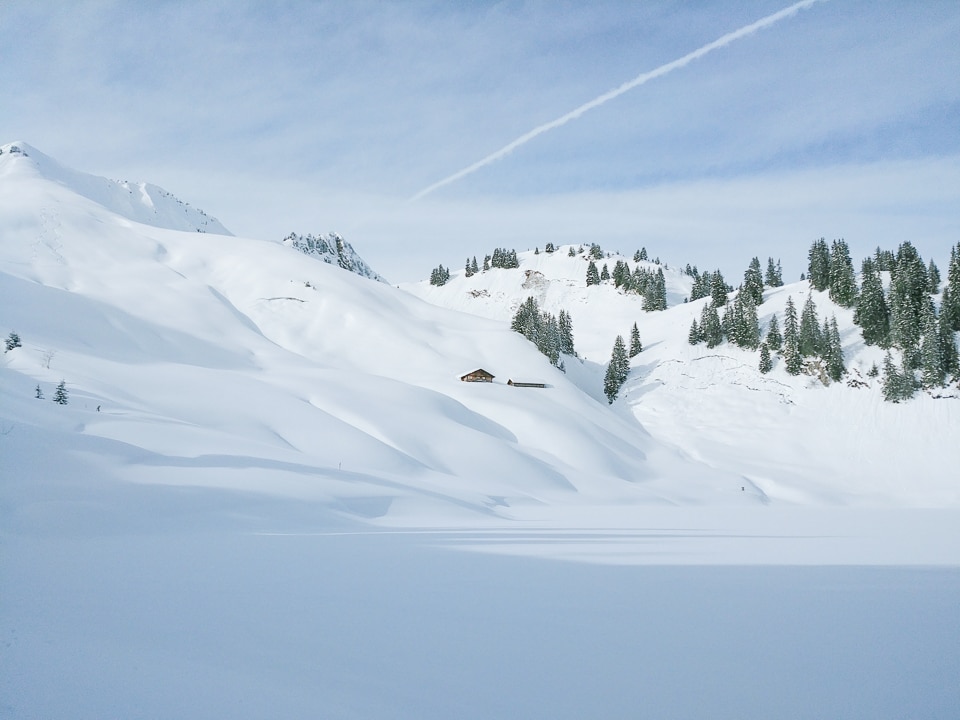 Finally, driven by the fear of having to spend the night outside and thanks to the traces already made on the way out, we managed to reach the cable car. I must admit that I have never been happier to finish a hike than that evening!

Completely exhausted by this adventure, we unfortunately could not take advantage of the other on-site activities such as visiting the igloo village, ice fishing or even skating on the frozen lake … And we did not even take worth discovering the beautiful city of Thun, preferring to return directly to us.

Pssst: If you want more info on the region of Bernese Oberland, I invite you to read the article by friends Pierre and Alexandra!

Besides the fact of making you discover the possible activities at Stockhorn, I also wanted to write this article to show you that despite our habit of hiking and our “knowledge” of snowshoeing, no one is safe from a bad adventure. It comes down to a big fright, a lost pair of glasses and a few stiffness in our case, but it could have been much worse. Hence the importance of always being well informed about the route upstream, of providing food and water (even for a few kilometers) and above all, of knowing your limits, knowing how to say stop and turn around. even when our pride would like to continue.

How to get to the Stockhorn

Thun, the gateway to the Bernese Oberland is located almost equidistant from the French border, whether from Basel (to the north), Geneva (to the south) or Pontarlier with between 1h30 and 2h of road.

To take the motorway in Switzerland, don’t forget to buy the sticker at customs (40 CHF – around 30 €).

Switzerland would not be the country of the train without a service to Thun and the villages which surround it!

Tickets can be reserved on the website of the SNCF or that of CFF for Swiss connections.

Switzerland is also very well served by bus to reach the villages. No matter where you stay, there will necessarily be a bus or train that will take you to your final destination.

Thun does not have an airport, you can choose to land in Basel, Geneva or Zurich and then reach Thun by train.

You probably know that life in Switzerland is expensive. It is for this reason, and also because we find it more fun, that we put on guest rooms at each of our visits to our neighbors. And so far we have never been disappointed!

During this stay we stayed in the village of Niederstocken in the Bed ‘n Breakfast from the village and I can only recommend this accommodation. An ideal location right next to a restaurant, charming hosts, a royal breakfast, a very nice room… in short, the best. 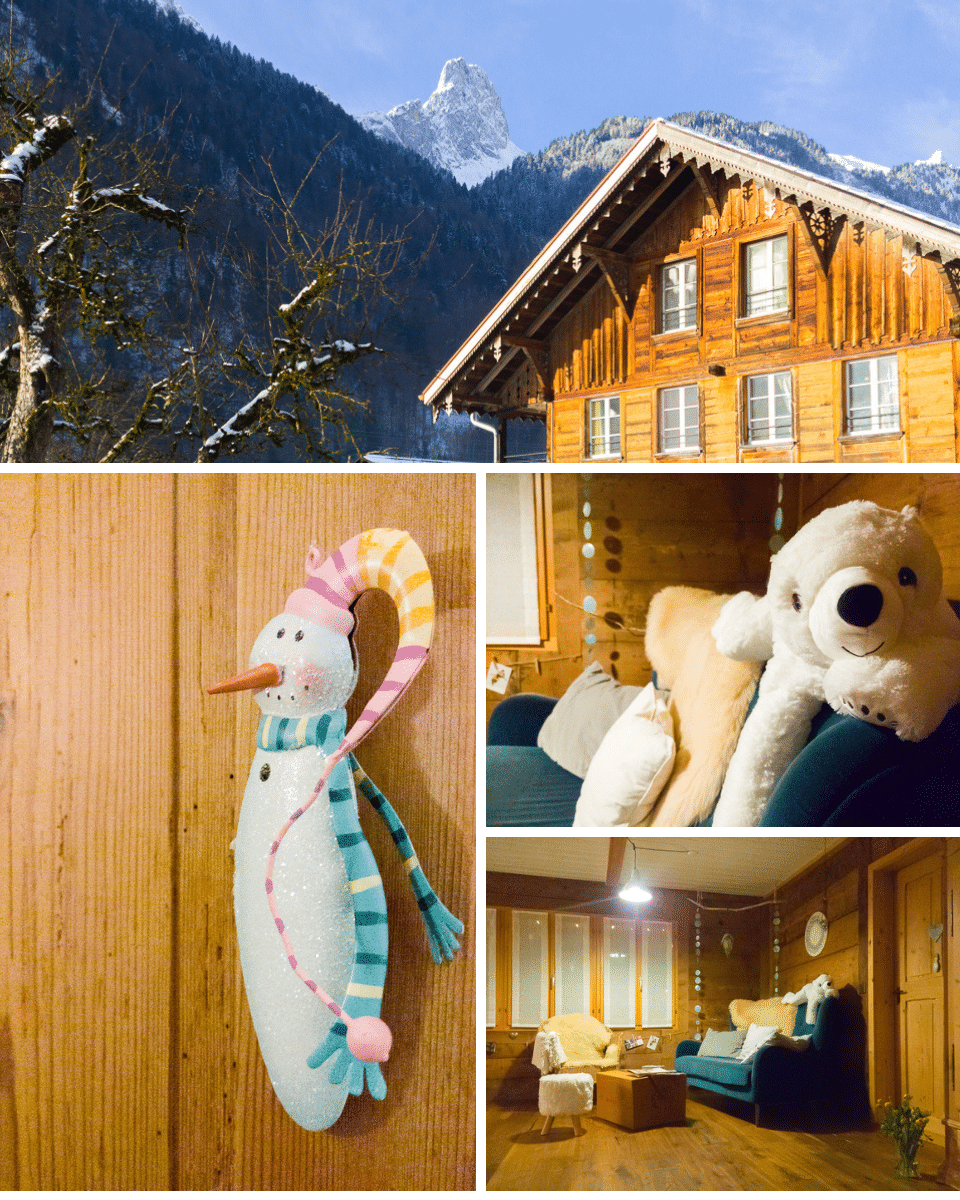 You will find more information on access to the Stockhorn by cable car, timetables and prices, as well as the various activities available on the Stockhorn tourist site.

Do you know the Bernese Oberland and the Stockhorn? Do you have any other tips for visiting this beautiful region? Do not hesitate to share them in comments!