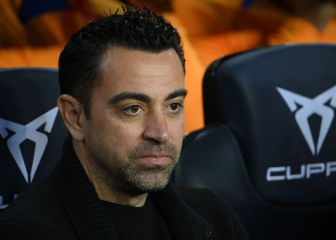 What analysis do you make of the match?

In the first part it was not us. Then we have tried. We have pulled from outside, we have entered from all sides, from the outside, from the inside. But he didn’t want to go in. This is our reality.

Three losses in a row at home.

Eintracht’s day was different, but against Cádiz and Rayo the games have had the same pattern. Rayo has had one and a half chances. We return to the issue of effectiveness. We are in a difficult situation but we have complicated ourselves. We have to keep going.

To what do you attribute this lack of effectiveness?

There are games that are complicated. We do not enter with the impetus that we have to enter. From the second half we have entered but they had already advanced. Everything has been complicated for us today. Slow game, with interruptions.

Does the team lack personality?

No. It is necessary to enter the match better. We had talked about it and it is a missed opportunity. We have to keep going.

What have they done to complicate it?

It has always been complicated. In November we were ninth. But in the club there are economic and sports emergencies. We are not afraid to play but the games get complicated and this is football. You have to disconnect for a few days and from the middle of the week prepare for the Mallorca game. We have five finals left, we have complicated ourselves.

See also  Xavi, forced to make changes in the eleven of Barcelona

Do you have a hard time holding your tongue with Gavi?

I have not seen. Was it a penalty? I do not know. The referee would have to come out to speak here. I was wrong today as a coach. I think I’ve given everything but I haven’t been able to play the key. I can say that I am wrong, but not the others. It would be disrespectful.